Canada's largest companies are facing continued shareholder anger about executive pay practices with one major company losing its say-on-pay vote so far in 2016.

An early review of 20 of Canada's largest companies that have held their annual meetings so far this year shows a slight increase in "no" votes for pay in 2016, while Canadian Pacific Railway Ltd. recorded the only loss to date with 50.1 of votes cast against the company's executive compensation practices. CP's chief executive officer Hunter Harrison earned $19.9-million last year while the company's share price fell 21 per cent.

Shareholder support for compensation remains strong on average, with companies in the S&P/TSX 60 index recording median support of 94.6 per cent on their say-on-pay votes so far in 2016, a slight drop from 95 per cent for the same group last year.

But the numbers continue to show pockets of discontent. Gold miner Goldcorp Inc., for example, had 22.3 per cent of votes cast against its executive pay practices this year, while Teck Resources Ltd. recorded a 25.3-per-cent "no" vote.

Canadian companies are not required to have say-on-pay votes to gauge shareholder support for their compensation practices, but many offer them voluntarily. The vote is not binding on the board, but directors typically make changes to pay practices when the results are weak.

York University law professor Richard Leblanc, who specializes in corporate governance issues, said he was surprised by the negative CP vote result because Mr. Harrison has been "widely regarded as being one of the most successful CEOs in the rail industry," but said shareholders have become intolerant of signs of non-alignment between CEO pay and company performance, particularly when the amount of pay is high.

"Shareholders are becoming less forgiving and they're agitating, but it's not widespread in Canada," Prof. Leblanc said.

He said it is notable that many of the "no" votes are happening at Canada's largest companies – including Canadian Imperial Bank of Commerce and Barrick Gold Corp. in 2015 – suggesting institutional investors are focusing their efforts on high-profile targets.

"You could probably find more examples of greater lack of alignment in smaller companies, but they just don't raise the ire to the same extent," Prof. Leblanc said. "It's like you pick these blue-chip companies and you vote 'no' and hope that message cascades downward."

BCIMC said CP's executive compensation program "is structured in a way that does not sufficiently align pay with performance," while PGGM offered a more detailed list of concerns about Mr. Harrison's pay, saying his $6-million annual bonus was paid "above target" and was based on "a non-rigorous performance goal."

In a statement explaining its voting decision, PGGM also complained that Mr. Harrison's personal performance was assessed by the board "at maximum" even though CP was in "a period of sustained relative underperformance."

While Mr. Harrison's total pay rose 6 per cent in 2015 to $19.9-million from $18.7-million in 2014, the company said he was paid in U.S. dollars and his compensation was down 8 per cent based on the average exchange rate for the year.

In a press release following its April 20 annual meeting, CP said its board "will take into account the results" of the say-on-pay vote, "together with other shareholder feedback and best practices in compensation and governance."

ISS also highlighted Mr. Harrison's personal use of company airplanes last year, which was valued at $1.1-million, saying this is a perk "not provided by most companies." ISS said investors "would benefit" from more disclosure by CP about its decision to "to provide perquisites that exceed market norms."

CP's shareholder proxy circular said the board has a "preference" that Mr. Harrison use company aircraft for personal use in North America, and said his usage did not increase in 2015 compared to 2014.

The company said Mr. Harrison's base salary of $2.8-million is higher than his peers in part because he is paid extra for forfeiting pension payments from Canadian National Railway Co. when he joined CP Rail in 2012. CP also said his total compensation since 2012 is only equal to 0.67 per cent of the $14.2-billion additional value that has been created in terms of CP's share price gains.

CP spokesman Martin Cej said the company takes a long-term approach when setting its executive compensation and said CP has "transformed" under Mr. Harrison's leadership "from the worst performing" major railway to "one of the industry's very best."

Proxy advisory firm Glass Lewis & Co. also recommended voting against CP's say-on-pay resolution, saying Mr. Harrison's high base salary causes other elements of his pay, including his annual bonus and long-term equity grants, to also become inflated because they are based on a multiple of his base salary. 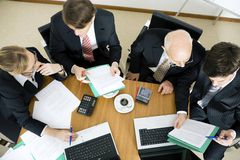