Sometimes it takes a visionary to almost lose a life before he can change the lives of countless others.

More than 15 years after AOL Inc. co-founder Ted Leonsis escaped death on a harrowing plane flight, Brian Scudamore found the inspiration he needed to transform his modest business into a home-service empire.

Mr. Leonsis's now-famous list of "101 things to do before you die," which he later wrote about in his best-selling book The Business of Happiness, was inspired by the 35 minutes that ticked by as he prepared for a crash landing and realized he would die unhappy. The business tycoon's experience instilled in Mr. Scudamore a greater sense of urgency to live his life with passion – and rope in his employees, friends and family along the way.

"Since I started my personal 101 life goals program, I've met [former U.S. presidents] Bill Clinton and George Bush Sr., had my company appear on The Oprah Winfrey Show, and even given her a big hug. When you come up with these crazy, audacious goals you think you could never accomplish, you realize that if you believe in them, you can make anything happen."

Today, the Vancouver-based entrepreneur operates the world's largest junk removal company. It's a quarter-of-a-billion-dollar business, which he started as a one-truck operation after dropping out of high school because of struggles with attention deficit disorder.

As the founder and chief executive officer of O2E Brands – the banner company for 1-800-Got-Junk?, Wow 1 Day Painting, You Move Me, and Shack Shine – Mr. Scudamore has professionalized and franchised the previously fragmented industries of junk-hauling, painting, moving and home-detailing.

He encourages each of his 400 employees in the Vancouver and Toronto offices to write down their own lists of 101 goals.

"A company has a responsibility to take care of its own people and not just the community," says the father of three. "We hold team meetings where we share life goals and the successes we've had, and give updates about how we help others accomplish their dreams.

"I got a text message yesterday from a guy in our IT department, a grown adult with kids who's terrified of water. I told him, 'I will help you conquer that fear. I will buy you your first three swimming lessons – let's get you going.'"

On Mr. Scudamore's own list of life goals, he's included taking a selfie in a tuxedo next to a penguin in Antarctica, flying a float plane, and adopting a village in Kenya. His very first goal – to give Ms. Winfrey a hug – was achieved through a combination of persistence and luck after his junk-hauling company was invited to appear on the show for a segment on hoarding.

"There I was in Chicago on stage, and in the green room afterwards, I came up to her and said, 'Can I give you a big hug?' I've always thought she was an incredible entrepreneur and leader."

Mr. Clinton was speaking at an event in Vancouver a month after the Sept. 11, 2001, terrorist attacks on the United States. Mr. Scudamore attended, bringing along with him a 1-800-Got-Junk? ball cap and sheer courage.

"There was so much Secret Security around him and the only way I could get to him was to make a beeline to the velvet rope past security," he recalls. "I squatted down at the head table, told him, 'Hi, I'm Brian from 1-800-Got-Junk? and I wanted to give you this ball cap. We had a nice chat for a few minutes.

'It's one of those things where I said to myself, it's on my list, so I will figure out a way and gather the courage to make it happen."

He has crossed dozens of other items off his list over the years, and continually replenishes it with new goals.

Mr. Scudamore, who was born in San Francisco, moved to Vancouver at the age of 7 (his mother had remarried to a Canadian) and gave up his U.S. citizenship at 24. He often went back to visit, helping his grandparents, immigrants from Odessa, Ukraine, run an army surplus store started by his great-grandfather.

"Many people believe you're born an entrepreneur. I loved playing the game of business, helping customers, stocking inventory – I found that very fun.

"Because of my learning difficulties with ADD, I was always the class clown and couldn't stay focused. To sit down and focus my energy on reading is still a challenge today," continues Mr. Scudamore, who also dropped out of business school after convincing the dean to let him register without his high-school diploma.

"For years my choices were a point of contention with my dad, who's a liver transplant surgeon [and lamented], 'My oldest son dropped out of college to become a junk man.'

"My dad is certainly on side with things now. I've always taken the road less-travelled and had different ways of doing things than everyone else."

Here's a sample of the goals on Mr. Scudamore's list:

3. Spend a night on the streets.

4. Learn to downhill mountain bike with my daughter.

6. Ride a camel in the desert in Middle East.

7. Build a school for entrepreneurship.

8. Find a treasure map and buried treasure with my children.

9. Go to the airport with my wife and let a stranger decide where we go.

11. Invite all the kids in the neighbourhood over for chocolate chip pancakes.

13. Tour the inside of FedEx's largest hub.

15. Teach a business class in French at a Quebec university.

Realtor tests his mettle through extreme sports
May 10, 2016 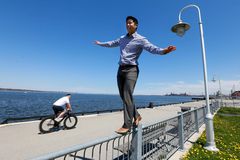 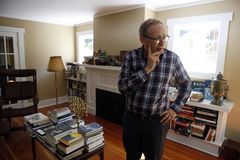 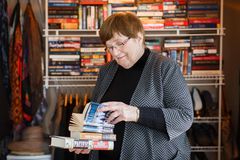