Alimentation Couche-Tard Inc. once tried to buy retail colossus 7-Eleven Inc. Now the Laval, Que.-based merchant of gum and gasoline is locked in a fight with its Japanese-owned rival for global convenience store supremacy.

The revelation is contained in a soon-to-be-released biography outlining the story of Couche-Tard founder and executive chairman Alain Bouchard. Titled Daring to Succeed, the book chronicles Mr. Bouchard's little-known climb from poverty living in a trailer with five siblings to the top echelon of Canadian business.

It was an aggressive, risk-taking climb, one motivated by a desire to make his own life and not depend on others after his father lost everything in a bankruptcy. As Quebec's francophone majority was experiencing its own ascension during the Quiet Revolution in the 1960s, Mr. Bouchard launched himself into a decades-long entrepreneurial effort to build Couche-Tard that eventually made him a billionaire.

And the story is far from over.

Couche-Tard is on track to tally earnings before interest, taxes, depreciation and amortization of $2.9-billion (U.S). next year on sales of $50-billion. That could make it Canada's biggest company by revenue, eclipsing all five big banks, George Weston Ltd. and Loblaw Cos. Ltd. and drawing it alongside U.S. giants Pfizer, FedEx and Coca-Cola. The company is already the world's largest convenience store operator as measured by corporate-owned outlets. 7-Eleven runs a largely franchised network.

If it had swallowed 7-Eleven, Couche would have been top dog a lot faster. But Mr. Bouchard misjudged his rival's willingness to sell.

"I'm used to casting many lines in the water because I'm a fisherman," the Couche-Tard founder said in sketching out his takeover strategy in an interview with The Globe and Mail earlier this month. "But it was a bit bold to proceed as I did with the Japanese. You don't go fast like that with them."

Couche-Tard first approached 7-Eleven in 2005. At the time, the Canadian company was riding high after taking over the Circle K Corp. chain from Conoco Phillips – a game-changing deal that cemented its push into the United States and gave it an instantly recognizable brand. Meanwhile, 7-Eleven was rebuilding following a recapitalization that saw majority control of the U.S. company pass to its Japanese affiliate Ito-Yokado as a subsidiary under Seven & I Holdings Co.

Mr. Bouchard flew to Tokyo to meet with Masatoshi Ito, founder of Ito-Yokado. The face-to-face was held at a restaurant in Tokyo and Mr. Ito was already there when the Canadian and his entourage arrived. Both men had interpreters and they quickly got to the heart of the matter.

"I told him what our intention was, that I thought our two great companies in North America were very complementary and that we had an advantage to merge," Mr. Bouchard recalls.

Mr. Ito listened, asked a few questions, then provided a long reply to the Canadian relayed through the interpreter. 7-Eleven had a nice business in Japan, he said. In the United States, it's not the the best but neither is Couche-Tard. Neither company is anywhere near as good as operators such as chains Sheetz or Wawa, so it would probably make sense if they worked to improve their standing separately before contemplating anything else.

"When she came to the end of her translation, [Mr. Ito] gets up and pulls out a little disposable camera to take a photo of my reaction to what he just said," Mr. Bouchard marvels with laughter. "Later on, he sent me the photo. And that was the end of that."

Today, antitrust concerns would make a merger with 7-Eleven extremely difficult. Recent deals including the purchase of CST Brands Inc. will vault Couche-Tard's store count in Canada and the United States above 10,000 versus about 8,900 for 7-Eleven. The two players are by far the most dominant in terms of sheer geographical footprint in the two countries, with Speedway a distant third.

If it's not a deal partner, 7-Eleven nevertheless represents a serious foe for Couche-Tard around the world.

The Japanese company, under pressure from activist investor Third Point LLC, said Oct.6 it would speed up expansion in North America by accelerating acquisitions. It also plans to bring a greater number of Japanese-style convenience store elements to its stores in Canada and the United States, including more fresh food and hot-snack counters.

Both Couche and 7-Eleven are consolidators in an industry still dominated by small chains. The Japanese firm is cash-rich and has outbid Couche in many takeover battles in the past, Mr. Bouchard said. With higher multiples being paid at the moment for convenience store assets, that trend seems set to continue.

Mr. Bouchard sees two clear advantages Couche has over its rival. One, its market currency, which he said is higher because its performance is better. His team estimates that Couche-Tard's network is roughly twice as profitable as 7-Eleven's on a per-store basis. Two, its status as a Canadian company, which he said could help it win mergers and acquisition contests in China and other Asian countries where 7-Eleven is hobbled by its Japanese roots.

That edge might be overstated. But history suggests it would be unwise to bet against Alain Bouchard. Time and again, he has proven his skill at making deals and turning underperforming stores into profit-making machines through tactics such as forcing landlords to renegotiate leases. Early on, he sometimes did the renovation work at stores himself, bashing down walls and installing coolers.

After helping grocer Provigo build out its new Provi-Soir corner store network in Quebec as an executive in the late 1970s, he became a franchisee but was forced out over a merchandise issue. A bailiff served him with an eviction notice at one of his stores. His wife at the time, raging over the treatment he was receiving, gave the company's delegate a furious warning: "One day, we will buy you out!" That's exactly what happened.

Years later, during a news conference to announce Couche-Tard's purchase of Silcorp, owner of the Mac's and Becker banners, a reporter asked Mr. Bouchard: What's next? Entering the United States, he answered. The company's shares promptly lost 8 per cent over the next several hours as investors bet yet another Canadian company would tank crossing the border.

What's happened since – a several-fold increase in the stock price – shows it took some time for the market to appreciate Mr. Bouchard's formula for corner-store retailing: Nix the traditional hierarchy and costs of head office and give local managers decision-making power while keeping tight control over operations through standardized reporting and a healthy culture of emulation. As for acquisitions: Don't overpay.

It hasn't all been glory, of course. A short-lived attempt to break into contact lens manufacturing was abandoned. The purchase of Dunkin' Donuts' Quebec network was an outright failure. "I bought the lame duck when I should have made a play for the whole chain," Mr. Bouchard acknowledges.

Daily operations of the company are now in the hands of Iowa-born Brian Hannasch, who took over as chief executive officer from Mr. Bouchard in 2014. It's Mr. Hannasch who's in charge of driving organic growth while Mr. Bouchard steers the deal making at a time when new competition is bearing down from a multitude of players such as Amazon.com Inc. and McDonald's.

When Mr. Hannasch first joined the company more than a decade ago, Mr. Bouchard and Couche's three other founders invited him north for a fishing trip, the biography recounts. He had expected a few casual boat outings, interspersed with long sessions of beer drinking and card games. What he got was serious fishing, excellent wines and a stack of songbooks.

"I thought it was a joke," Mr. Hannasch said. "We were going to sing. And I do not sing!" Thus the American was initiated into the inner circle of Couche-Tard's Québecois builders.

Alain Bouchard is serene these days when asked about the slap to the face shareholders delivered him over a proposal to let the founders retain the special stock rights that give them control of the retailer – set to expire in 2021 under a special sunset clause. Previously blaming "investors in Toronto" for blocking their effort to keep a grip on the company, he now says he believes a solution can be found to settle the matter.

"The size of our company works in our favour," he said, adding he has no plans to relinquish control or stop working. "My fundamental business principle is if you stop, if you just tread water to maintain what you have, you go backwards. I think we still have lots to do."

On how Couche-Tard has adjusted to the consumer to win: "Who would have thought even 10 years ago that we would sell hundreds of thousands of dollars worth of water every year in our stores? Not me."

On being told to sell healthier items in his stores: "We've done that. But Bubba still wants his hot dog. When the guy who works landscaping comes into the store and he's hungry, don't try to sell him a healthy sandwich."

On risks to the business: "Government is our biggest threat. They want to regulate everywhere and everything. And they're reactionary. They react to everything and anything. Freedom is ephemeral."

On how the emergence of electric cars might affect the company's gasoline revenues: "I believe that the electric car is a temporary thing. It's a transition to another energy that we don't know yet."

On wanting his four children to make their own way while benefiting from the wealth he'll pass on to them: "I'm not prepared to give away my fortune to foundations" the way Warren Buffet and others have. "We're poor here in Quebec. We need to create wealth, to have fortunes based here. Ideally, to allow our children and grandchildren build on that wealth in order to create a stronger, richer and more prosperous society." 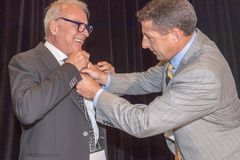 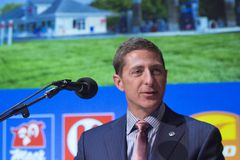