Eight days after La Presse announced it will stop publishing its weekday print edition in January, proclaiming its digital transformation a success, the newspaper said it is cutting 158 jobs over the next three months.

The French-language daily, based in Montreal, gathered staff on Thursday morning to relay the bad news. At that meeting, president and publisher Guy Crevier told employees, "We're no longer the newspaper that's existed for 131 years. We're a new company with a new model."

The layoffs will be felt across the company by unionized and non-union staff as well as management, and mark the latest milestone in a radical transformation of the La Presse newsroom. The company has bet its future on a free tablet edition, dubbed La Presse+, and is gambling that it can sustain its news-gathering almost entirely through digital advertising, while earning almost no revenue directly from readers.

"In simple terms, there are about 100 jobs being lost that are tied directly to stopping the print newspaper" on weekdays, Mr. Crevier said in an interview. "We are no longer the same business."

In 2011, La Presse boosted its staffing significantly as part of a $40-million investment to launch and develop La Presse+. Now, after refining and promoting the tablet product, the company is shedding 102 permanent and 56 temporary jobs, virtually all of which will be cut by January. By that time, 633 permanent staff will remain – four fewer than were working for the paper in 2011.

La Presse has also pledged to continue publishing its Saturday print edition, even as it focuses on the tablet version, which has passed a tipping point by accounting for 60 per cent of La Presse's revenue.

The cuts include 43 newsroom jobs, 35 to 40 circulation staff, plus customer service representatives, managers and temporary hires. For the past two years, La Presse aggressively marketed its tablet product, even driving a truck around to give demonstrations, but that phase is over.

"We're in operation mode now. We're no longer in development mode. So our needs are less," Mr. Crevier said.

Yet the union that represents newsroom staff decried the depth of the cuts, and raised concerns about La Presse's ability to sustain its journalism given the demands of producing the labour-intensive tablet edition.

"It was a lot more [cuts] than what we expected, and we're really worried about La Presse's capacity to publish its edition every day with the staff level that's announced [Thursday]," said Charles Côté, who is president of Le syndicat des travailleurs de l'information de La Presse (STIP), and also the paper's environment reporter.

"I'm not sure we're going to be able to maintain the high level of quality that we have right now."

In addition to the print-to-digital shift, Mr. Crevier cited "the crisis faced by the media in general" as a major factor behind the layoffs. La Presse lost 20 per cent of its revenue between 2011 and 2014, and the layoffs are designed "only to balance out our costs with our revenues," he said. He hopes La Presse will be profitable "in future years."

Mr. Côté, however, remains unconvinced that the newspaper's finances justify such sweeping layoffs.

"They quote figures from the newspaper industry and we're supposed to be moving away from that," he said. "We want to know more about the actual figures and there's not much transparency right now about this."

La Presse, which is owned by Gesca Ltée, a subsidiary of Power Corp. of Canada, does not disclose detailed financial results.

Mr. Crevier said he shares some of Mr. Côté's apprehension, but believes La Presse is on a path to grow.

"I have a lot of respect for our employees. They worked very hard to help us develop La Presse+. I'm affected by what's happening today, too," Mr. Crevier said. "It's a bad day, but we did a good job." 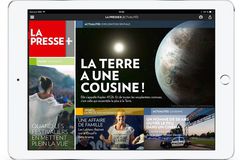 Opinion
Newsprint’s rise and fall, as read on a tablet
September 18, 2015 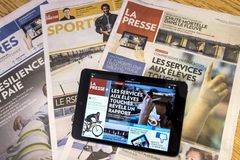 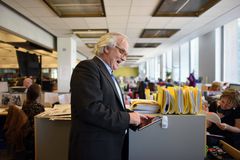 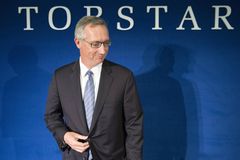 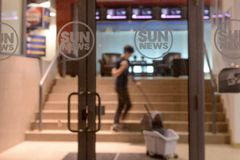