Canada's softwood lumber industry is carefully parsing every word from United States Trade Representative Robert Lighthizer, who said the Canada-U.S. softwood lumber dispute is at the "top of his list" of trade priorities with Canada.

Mr. Lighthizer said in his Senate confirmation hearing this week that the recently expired Softwood Lumber Agreement "really did not work the way it was supposed to work … We have to have a new [deal]: Either litigation or a new agreement that does work."

Those options were effectively already on the table, though Mr. Lighthizer's words add more urgency and more questions for Canada's softwood companies – which this year already face both a federal U.S. trade investigation and growing protectionist sentiment in the U.S.

"I don't really know what it means for our company or the industry, simply because there's no detail," said John Burch, vice-president of sales and marketing with Teal-Jones Group, one of the biggest private forestry companies on Canada's West Coast with 1,100 employees.

Because of the present lack of dialogue between the two countries' industries – and Mr. Lighthizer's lack of clarity as to whether softwood lumber would be part of North American free-trade agreement renegotiations – Mr. Burch said the nominee's careful comments "aren't unexpected at this stage."

Paul Whittaker, chief executive of the Alberta Forest Products Association, pointed out that Mr. Lighthizer, a former deputy U.S. trade representative under Ronald Reagan, was unsurprisingly careful with his language, given his deep experience.

American industry, led by the U.S. Lumber Coalition, has suggested for many years that Canadian lumber companies have a distinctly unfair advantage – a subsidy, even – because so much of their softwood comes from provincial land. Before the nine-year truce of the Softwood Lumber Agreement, Canadian softwood imports at one point faced an average 27-per-cent tariff, bringing billions of dollars to U.S. coffers.

The agreement expired in 2015. This January, the United States International Trade Commission said it found "reasonable indication" that Canadian softwood imports have since "materially injured" the U.S. sector. The commission, alongside the Department of Commerce, is now further investigating the trade relationship, with findings expected in late April.

This has left the possibility of prolonged and costly litigation on the mind of many Canadian stakeholders who fought, and won, the same exhausting cross-border battle before. A new agreement could circumvent that, but American industry is firm in its stance that Canadian counterparts are subsidized, so a legal battle can't be ruled out – hence the familiarity of Mr. Lighthizer's comments.

Some Canadians are optimistic this time around, thanks in part to political turnover. "It doesn't seem to me that the U.S. coalition has the same political influence south of the border that they once had," said Seth Kursman, the vice-president handling government affairs with Resolute Forest Products Inc. in Montreal, which has holdings primarily in Ontario and Quebec.

Others, however, hear a more hard-line stance in Mr. Lighthizer's words. "I think it's a lot of sabre-rattling and positioning on his part," said Ted Murray, vice-president of Murray Brothers Lumber Co. Ltd., a 105-person operation based in Madawaska, Ont. He's hopeful the countries can strike a trade agreement without litigation.

So is the B.C. Lumber Trade Council. "We appreciate that softwood is a top priority for the Canadian government, and having this issue become a priority in the U.S. will help both sides to come to the table to discuss and resolve this dispute," said Susan Yurkovich, its president, in an e-mailed statement. "We believe our time and effort is better spent on working together to grow the market for wood products, and not spending money and time on litigation."

Natural Resources Canada pegged the forest industry at $32.7-billion in 2015, making up nearly 7 per cent of the country's exports. The U.S. Lumber Coalition has argued that Canadian imports "surged" since the Softwood Lumber Agreement's expiry, with volumes up 33 per cent year-over-year for the first eight months of 2016. 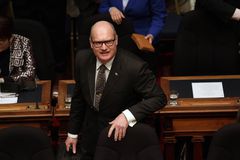