Retailers controlled by Canada's Weston family are moving to compensate victims of a deadly building collapse in Bangladesh as reactions to the tragedy goad companies to take greater responsibility for far-flung global supply chains.

Toronto-based grocer Loblaw, which makes the high-profile Joe Fresh fashion line, and British-based Primark said on Monday they would spend an unspecified amount to help those tied to the 380 or more who lost their lives, many of them employed in factories making garments for export. Primark also called on other merchants to come forward and offer compensation.

The unusual move underscores a growing sense of responsibility on the part of globalized businesses operating in an age of instant communication. It also comes as authorities in Bangladesh move to quell criticism that operators of substandard factories face few consequences.

The illegally constructed, eight-storey Rana Plaza in Savar, a suburb of Dhaka, collapsed in a heap Wednesday morning as thousands of people worked inside in five garment factories.

About 2,500 survivors have been accounted for. The disaster follows a garment factory fire in Dhaka five months ago that killed 112 people and brought widespread pledges to improve safety standards.

Visiting injured garment workers Monday, Bangladeshi Prime Minister Sheikh Hasina said "no one would be spared" in the probe of the disaster. And Finance Minister Abul Maal Abdul Muhith said the government will launch an inspection drive to identify dangerous factories among the thousands that contribute to the country's $20-billion in annual garment exports.

Fashion and retail companies have made Bangladesh a go-to apparel-making destination after Canada and other countries dropped import tariffs and quotas for it and other least-developed nations to help bolster their sagging economies about a decade ago.

The Retail Council of Canada held an urgent meeting on Monday with Loblaw, discounter Wal-Mart Canada Corp. and other major players to discuss their next steps.

W. Galen Weston, executive chairman of George Weston Ltd., expressed concern for the victims and their families when asked about the disaster on Monday at an event launching neuroscience projects partly funded by the W. Garfield Weston Foundation. He suggested that "change could be influenced by engagement of industry groups, such as retailers, and governments here and abroad aimed at improving approaches to implementing building safety practices," Loblaw spokeswoman Julija Hunter said in an e-mail.

"Our priorities are helping the victims and their families, and driving change to help prevent similar incidents in the future," Ms. Hunter said, adding the company is working on details of the compensation.

The complexity and fluidity of the global clothing supply chain can make it difficult to identify who are the ultimate clients of a textile factory – not to mention who should take responsibility, either moral or legal, said George Hodge, an associate professor in the College of Textiles at North Carolina State University.

Retailers often change suppliers several times a year, he said. "For each season, they are looking at who can make it now, and who offers the best value."

Still, the most conscientious retailers do care about working conditions at the plants, Prof. Hodge said, although they must often rely on third parties to inspect and certify those operations. "Only a few companies can do it themselves. They often are dependent on … third or fourth parties."

Companies are aware that in the age of instant communications, there is no avoiding the damage to their brand if it is linked with a disaster like that in Bangladesh, Prof. Hodge said. The image of a label in the rubble of a collapsed factory will spread instantly around the globe. "Companies have to manage this issue, even if they are not directly responsible."

Liana Foxvog, a spokeswoman for the Washington-based International Labor Rights Forum, praised the move by Primark and Loblaw to offer compensation, noting that other Western retailers involved in similar incidents in the past in Bangladeshi factories have only made such moves after pressure from activists.

Her group and other labour activists have been pressing for brands to sign onto a 2012 agreement that would establish independent inspections of Bangladeshi factories for fire safety and building-code violations – something she hoped those involved in the most recent tragedy would also endorse.

Ms. Foxvog said a compensation model developed by local and international unions after a Bangladeshi factory collapsed in 2005 would have entitled the families of victims of last year's fire at the Tazreen clothing factory on the outskirts of Dhaka, which killed 112, to $36,000 (U.S.) each, but none of the U.S. brands involved in that incident have yet paid compensation.

"It doesn't seem like much. But in Bangladesh, it helps provide for a family where the minimum wage is $38 (U.S.) a month," Ms. Foxvog said."None of this compensation can obviously do anything to bring back the people who died … but at least the children of the workers who die are not starving."

Ms. Foxvog praised Loblaw and Primark for their move offering compensation in the Rana Plaza collapse, adding that she hoped the companies were offering something close to the amount asked for in the Tazreen disaster.

"Now we're waiting for the U.S. brands and all the other European brands to follow suit," she said. 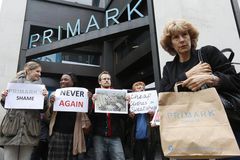 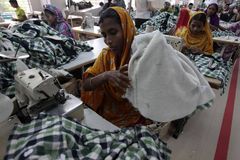 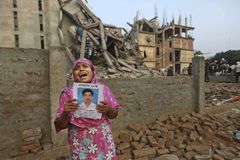 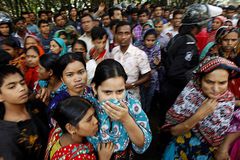 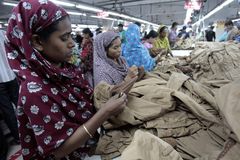 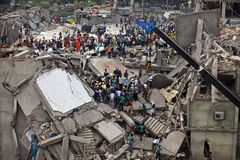 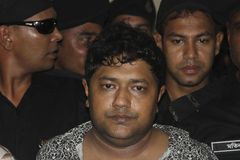