Canada's biggest grocery chain and the country's largest pharmacy will become one company, creating a homegrown juggernaut in the face of stiffer competition from the consolidation of existing players and the entry of a major U.S. retailer.

Loblaw Cos. Ltd. announced Monday an agreement to buy Shoppers Drug Mart Corp. for $12.4-billion in cash and stock. The Loblaw deal, which gives the company a dominant presence in urban core markets – no-go zones for big-box retailers – means downtowners who use Shoppers as their local convenience store will be able to stock up on President's Choice cookies while getting a PC Financial bank account.

While both companies will retain their identities, Loblaw customers will be able to buy Shoppers's Life-brand products and get health and beauty advice.

Both companies, which have robust loyalty programs that track every purchase, will use that information to create comprehensive portraits of customers to develop tailored marketing pitches.

For Mr. Weston – the once publicity-shy executive who has become the most prominent ambassador of the family-friendly Loblaw brand – the Shoppers acquisition comes as seven-year effort to restructure the company draws to a close. Now, he is turning his attention to creating a strategy to deal with intensifying competition.

Mr. Weston said he had been mulling a major acquisition for years, but only presented the final offer to Holger Kluge, chair of Shoppers, last Thursday morning. The men said they met in a minivan on a country road northwest of Toronto, prior to a strategic planning retreat for Shoppers.

Loblaw will add 1,242 Shoppers Drug Mart and Pharmaprix locations to its stable of more than 1,000 stores, which include Loblaws, No Frills, Fortino's, valu-mart, Atlantic Superstore, T&T Supermarket, and others.

Monday's announcement continues a trend of grocers "bulking up for competition and growth," said Ed Strapagiel, a retail consultant. In March, Target Corp. opened its first Canadian outlets and last month, Sobey's Inc., the country's second-largest grocer, launched a $5.8-billion takeover of Safeway Canada. "There's a lot of price pressure from the likes of Target, Wal-mart, and Costco. Loblaw can now withstand that pressure a lot better."

"Health and wellness has been a big interest of mine for over a decade," explained Mr. Weston, who assumed his current position in 2007. "You can see it in the public comments over the last five years. You can see it in the assortments and services that are going into our stores." Among other initiatives, Loblaw has been investing in its Blue Menu house brand, targeted at consumers who are mindful of their health.

"This is one of the smartest and well thought-out acquisitions I have seen in years," said retail consultant George Minakakis. "In addition to the loyal customer base that Shoppers has, this will further raise credibility to Loblaw pharmacy and make it more challenging for new entrants to acquire customers."

Though the Competition Bureau immediately signalled it would review the deal, as is customary for any transaction exceeding $400-million, executives of both companies argued that it should not raise any regulatory red flags. "These are two complementary businesses," said Mr. Weston. "Loblaw has about 5 per cent market share in the pharmacy business, so from a Shoppers Drug Mart perspective, it is not significant. And (Shoppers) have about $1-billion in food sales on top of our $30-billion in food sales, so we don't think it's significant."

When Mr. Weston took over his family's iconic company in 2006, at the age of 33, he assumed an obligation to re-engineer a failing growth strategy. The plan that Loblaw had put into place a few years earlier to take on Wal-Mart, which included building more low-price Superstores, had gone awry and Loblaw had lost billions of dollars in market value. In response, Mr. Weston embarked on a restructuring strategy that sought to scale back the company's lineup of non-food products, which it had introduced to combat Wal-Mart. "It will take up to three years to get ourselves back to where we need to be," he told analysts at the time.

While he did not mention any U.S.-based competitor by name, Mr. Weston's speech was loaded with references to Canada and Canadians, as he evoked the storied 104-year history of his company.

Analysts noted that the deal is not a fait accompli, as Shoppers may receive other offers from cash-rich U.S. suitors such as CVS Caremark and Wal-Mart. 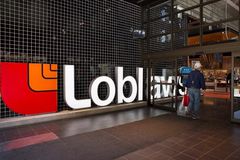 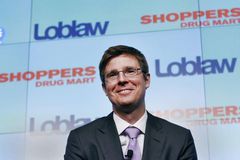 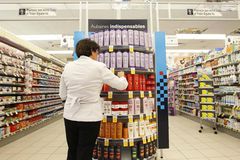 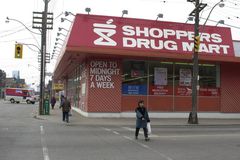