[French] You saw this morning the announcement from Rona's board of directors and faced with this event – something I rarely do, in fact this is the first time as Finance Minister that we in the government have intervened to give our opinion:

[English] the transaction is not in the interests of neither Quebec nor Canada.

[English] And close to 90,000 jobs in Canada, directly in the stores, indirectly through suppliers.

[French] It's ... very significant for the entire Canadian manufacturing industry. It's the wholesaler/buyer aspect. Rona buys more than 85 per cent of its purchases in Canada, close to 47 per cent in Quebec.

... So this is why we are against this transaction. And we wish to say that we have mandated [provincial investment arm] Investissement Quebec to study every means it can use to block this transaction.

Q: [French] What options do you have right now?

I also call upon all shareholders who own shares in Rona, which is widely held. In this kind of transaction, you have to closely examine Quebec's economic interest, of the country generally. It's a hugely important company. I believe it's one of the most important customers of the Desjardins Group, not only the parent company but all the buyers and all the suppliers.

And we simply can't think that, despite the good-faith statements made by a buyer, that in the long term economic rationalization won't come to dominate and that this purchasing power now clearly exercised in Canada won't be eroded over time.

What do you fear most from this transaction in the long term?

Basically, over the long term it's an economic deconstruction. We're talking here of 90,000 Canadian jobs, almost 50,000 in Quebec, and a lot comes from the supplier network. Now, I was at Metro for a long time. The first time you consolidate as a wholesaler and distributor, it's all about purchasing and ultimately economic rationalization leads you to purchase where it's most economical to do so, and that's not necessarily in Canada.

The other element is that Rona is also a deeply rooted player in the community. They are a major sponsor of all the Canadian Football League teams. Many Olympic athletes [they sponsor] are involved in the community. It's very important for the country.

Why are you protecting Rona when you didn't protect Alcan?

One has nothing to do with the other. In the case of Alcan, it was a $40-billion transaction and I would say to you that I defended Alcan. I intervened ... many months before the Rio Tinto transaction, once I realized that international companies were buying up Canadian mining companies. I intervened in Quebec.

Let me also remind you that I [ensured] the continuity agreement guaranteeing that Alcan's head office [stay in Montreal] so long as the owner was operating in Quebec. I was successful in that case.

In the case of Rona, there is a guarantee that the head office will remain in Boucherville, and also regarding purchasing. That's not enough?

I speak also as a Canadian, but as a Quebecker, when you examine the Loblaw acquisition of Provigo, there are many short-term promises and as long as they are kept so be it. The American Lowe's duty is to maintain its profits .

Is it possible to block the transaction with Investissement Quebec?

I think it's [English] too early to call that one.

[French] This is Day 1. The other company has not tabled a formal offer. They have made an informal proposal to Rona's board of directors ... The board of directors rejected it. Will the other party make an offer? Investissement Quebec is certainly free to conduct a certain number of market transactions. This kind of process will take many weeks.

Will you ask the federal government to block the transaction, as Saskatchewan did [in the case of Potash Corp.]?

I have already made Mr. Paradis, the Industry Minister, aware of this transaction and that it is in the interest of Canada. We're talking about 100,000 jobs in Canada.

You talk of how important this company is but is strategic to such an extent? It's not, after all, a company that must at all costs be protected, is it?

... We are in a globalizing world where Bombardier buys, Couche-Tard buys, Canadian companies are bought or sold.

[English] That's fine with me.

[French] Is there a link between Investissement Quebec possibly buying shares and the Caisse having bought more shares?

The Caisse de depot is autonomous and independent. You saw this morning's news release [from the Caisse] which sees the long term interests of its depositors, but also the economic interest of Quebec and it decided to take action in the market. I found out just like you, reading the news release about 20 minutes ago.

Did you have direct talks with Lowe's and with Rona in the past few months regarding this transaction?

I didn't have direct discussions with Lowe's. Yes, I spoke with the CEO of Rona. Because it's not a surprise transaction. At Lowe's annual meeting, or the meeting for analysts, it was stated that they were interested in Rona. Of course this has been on my radar for some time.

What will you do if shareholders say yes to an offer from Lowe's?

We're far from that outcome. This process will take several weeks. Lowe's got a very clear message today ... I saw earlier the news release from the Solidarity Fund backing Rona's position. So a company – particularly a retail company – can sometimes get the message.

Because it's not just a retailer. It's one of the biggest wholesalers in Canada. That makes it a huge buyer.

Do you think Ottawa will block this transaction? If not, how much are you prepared to [invest]?

First, Lowe's has not made a formal, hostile public offer. So I would say your question is premature.

How much are you prepared to put in?

I don't have an answer to that question today. But look, we're not going to nationalize Rona. Let's be serious. There is consulting to be done [with pension funds and institutional investors].

[English] What kind of message do you think it says to investors from outside when the government is willing to block you to prevent you from investing in Quebec?

In this particular case, Rona is a major, major player in the Quebec economy.

It's the hollowing out of Canada, basically. It's such an important part of your retail and wholesale sector [that] is let go. And that's why we think it's not in the interests of Quebec, nor of Canada.

Would you be making this announcement today if there wasn't any election call tomorrow?

Yes. To be very frank ... because of the shareholders' meeting or analysts' meeting Lowe's had a few months ago, I was kind of prepared and ready for that. And I had hoped in a sense rather it would become public sooner so that if either Lowe's had gone public with its offer or Rona had gone public with it rejection of the offer than it would be away from the electoral [sic] campaign. I don't think that's a partisan issue and my reaction would have been exactly the same.

The Caisse has 16 per cent of Rona as of today. How much would Investissement Quebec be taking? Are we still talking about a minority stake, just enough to block a takeover? A poison pill? What are we talking about here?

Oh, the mandate ... give Investissement Quebec is to look at all the means can muster to see how they can contribute to this offer not eventually being successful.

What kind of money are you willing to put out?

It has to be a reasonable amount. As I said in French, you know, we're not going to nationalize Rona. In fact, there are major shareholders, maybe some shareholders there who would like to sell, take their profit but wanted the control to be kept in Canadian hands and Investissement Quebec could accumulate a small part.

Are you deeming Rona to be a strategic asset so important to Quebec that it can never fall into foreign hands or is this a play on your part to get a higher offer for the Quebec investors who hold Rona shares?

It's not a play to get a higher price. I think Rona is a strategic asset for Canada as a whole. When you're speaking in Canada of close to 30,000 employees, 28,000 employees for Rona in the stores and franchises and also 80,000 Canadians that work for the suppliers of Rona, if you add them up it's over 100,000 Canadians. ... The key, of course, in that business is the purchasing power and that's the first thing that's centralized and at the end of the day rationalization takes over whatever short-term promises [are made] for 10, 15 years.

Have you spoken to Mr. Paradis to get his views about whether he shares the same views that Rona should remain in Canadian hands?

I've informed Mr. Paradis of the position I would be taking. 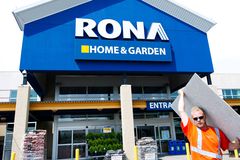 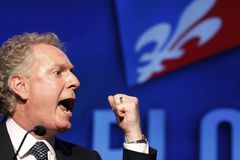 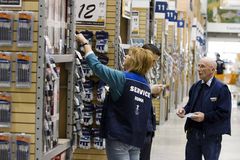