Lululemon Athletica Inc. founder Chip Wilson served up a harsh assessment of the yoga wear retailer's missteps over the past few years – and a critical view of its former chief executive officer.

Mr. Wilson, who stepped down from Lululemon's board of directors in February after a rift with it over its governance, described the Vancouver-based retailer today as "a 17-year-old teenager staying at home with stepparents that adore it but don't really love it and don't fully understand it."

And he took responsibility for the effects of his controversial remarks during a television interview in late 2013 when he seemed to suggest that some women were too large for the retailer's pants – and touched off a storm.

Mr. Wilson was speaking publicly for the first time on Tuesday about the 2013 comments, which he made as Lululemon struggled from the fallout of having to pull its signature black pants for being too see-through.

Now, his family has launched its own fast-growing chain, called Kit and Ace, which sells an upscale line of casual apparel. Some industry insiders consider it to be yet another competitor to Lululemon, which itself is expanding into more street wear.

At the same time, Lululemon faces a growing array of rivals, including Gap Inc.'s Athleta division and Under Armour.

"Three years ago, Lululemon was worth twice as much as Under Armour," Mr. Wilson, dressed in black, including black sneakers, told an International Council of Shopping Centres conference.

"Today, Under Armour is worth three times as much as Lululemon. Lululemon has a much better business model, makes bigger margins, makes bigger profit. That's the discrepancy."

He took a shot at former CEO Christine Day, under whose leadership the retailer grappled with its see-through pants setback. Without naming Ms. Day, he said "she" stopped hiring product, quality and innovation experts. "It drove me crazy."

He said he tried to persuade her and the board to shift from yoga to "mindfulness," which is the next big trend he sees in retail and a concept on which he and his wife have built a new meditation business, called Whil.com. But Ms. Day and the board rejected his mindfulness idea, he said. He said he felt at the time that "there's a big hole in the side of the boat and we're going down."

He left with his family to live in Australia but returned to Vancouver in 2013 when Lululemon asked him to help with the see-through pant problem.

Soon after, he offered Lululemon the technical cashmere fabric that his wife, Shannon Wilson, had developed and which is now the basis of Kit and Ace. The board turned it down twice, he said.

Then "the biggest disaster of my life" happened in late 2013 when he said in a Bloomberg TV interview that some women don't fit into some of the Lululemon pants – seemingly blaming customers for the retailer's quality snags.

"I was honest, but, I tell you, I was wrong," Mr. Wilson said on Tuesday. "My life was perfect up until this point and then it became a disaster not only for me but my family and Lululemon."

But he said the board "nailed me as a scapegoat" and press articles – to this day – refer to his comments.

Even so, he said, he now thanks the media for forcing him to learn from the crisis: Women were buying Lululemon pants that were "two to four sizes too small" and really wanted Spanx-like super-stretchy pants that hugged their bodies and hid their flaws.

Such a technical innovation was something that he had tried to push for at Lululemon, he said.

Lululemon recently introduced a pricier pair of "compression" pants, but Mr. Wilson said the retailer has shied away from trumpeting the new pants and cashing in on the new effort.

Shannon Wilson, who was previously lead designer at Lululemon, said in an interview that Kit and Ace was the first to specialize in "technical luxury" and is not a direct competitor to Lululemon.

"I feel Lululemon is built for sweat," she said. "We're built for movement." 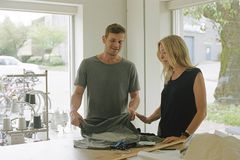