Magna International Inc., one of Ontario's biggest employers, has issued a blunt criticism of the province's new labour legislation, saying the changes threaten future investment and jobs and will make the company less competitive.

The new labour laws add to other factors that put new investment in the province at risk, Magna said in a submission to the Ontario legislature's standing committee on finance.

The changes to workplace rules come on top of uncompetitive hydro rates; cap-and-trade programs; increased payroll and pension costs; and personal income tax rates that are among the highest in the G7 countries, the auto-parts giant said.

Opinion: Ontario gets it right with move to higher minimum wage

"For the first time in our 60-year history we find ourselves in the very untenable position of questioning whether we will be able to continue to operate at historical levels in this province," said the submission, which was signed by Marc Neeb, an executive vice-president of Magna and chief human-resources officer.

The legislation has broad support among labour and social groups, but businesses have argued against the changes amid fears of rising costs and a more stringent regulatory burden.

Magna is the largest employer in the auto sector in Canada and one of a handful of homegrown Canadian companies that have risen to the status of global giants. It employs 22,000 people in 50 plants and engineering centres in the province and its head office in Aurora, Ont.

"Ontario's overall cost model must remain comparable to the market that we compete with for business," Mr. Neeb wrote. "This is especially important when our main competitor to the south is working harder than ever to reduce costs, regulatory burdens and promote business efficiency and productivity. From our perspective, the province of Ontario seems to be moving in the opposite direction."

The centrepiece of the legislation is a boost in the minimum wage to $15 by 2019, but it also includes increases in vacations and personal leaves; more rigid rules about scheduling; and legislated equal wages for part-time, contract and temporary workers performing the same jobs as full-time employees.

The changes are being rushed through without being thoroughly examined or costs being completely assessed, Magna contended in a submission to the committee, which has been holding hearings around the province on Bill 148, the Fair Workplaces, Better Jobs Act.

The company called for phasing in the increase to $15 in the minimum wage over a longer period, saying that although the change will have no significant direct costs to Magna, it will affect its suppliers.

The provision in the law allowing employees to refuse changes in scheduling with less than four days notice is "completely impractical" in the auto industry given just-in-time production and delivery of parts and daily overtime requirements, Mr. Neeb wrote.

Legislated equal pay rates for workers who are not full-time is likely to lead to Ontario businesses reducing the number of flexible employees they will hire for such roles, the submission said. It suggested limits of 12 to 18 months on the use of temporary employees to eliminate abuse of temporary workers.

"Ontario can be both fair to workers and globally competitive," Magna said, "if a balanced approach is taken."

Several labour unions are scheduled to appear before the finance committee in Toronto on Friday.

"The changes introduced in Bill 148 will greatly help millions of workers and their families who are struggling with precarious, insecure work and will serve as a bold first step to modernize Ontario's employment laws," Unifor said in its presentation to the committee. Unifor has 160,000 members in Ontario (including workers at The Globe and Mail) and represents employees at factories in the province operated by Fiat Chrysler Automobiles NV, Ford Motor Co. and General Motors Co. Workers at a handful of Magna plants are represented by Unifor.

The Automotive Parts Manufacturers Association of Canada urged the government to exempt export-oriented sectors from the laws – apart from the change in the minimum wage.

In a submission, Flavio Volpe, president of the association, said the ability of auto-parts companies to compete globally should not be harmed "by blanket provisions used to target industries that take advantage of their work force." 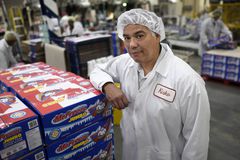