Manulife Financial Corp. is clamping down on coverage of some prescription drugs coming to market that don't offer value for their exorbitant price tags.

The insurer has begun evaluating new high-cost and high-volume medications, and for the first time will exclude drugs from coverage if they don't meet clinical effectiveness standards in relation to their expense. It's a move Manulife says clients have been asking for as more pricey treatments are being developed, and one that the company says will boost its negotiating power with drug manufacturers. For employees covered by a Manulife drug-benefit plan, this could mean that claims for some new medications won't be paid.

The assessment program, called DrugWatch, is being implemented as a way to ensure Manulife's hundreds of voluntary, company-sponsored health-benefit plans remain sustainable in a rapidly changing landscape. Nearly 3.8 million Canadians have drug coverage through one of the company's plans.

"We believe that if the industry has a chance at long-term sustainability, that the adoption of this kind of rigorous oversight is not only important but also responsible and necessary," said Matt Miles, vice-president of product and marketing in Manulife's group benefits and retirement solutions business.

DrugWatch responds to the trend of climbing prescription drug prices that are putting pressure on private insurers and employers that sponsor workplace benefit plans for employees and their dependents.

Historically, when a drug was approved by Health Canada, it was automatically added to Manulife's list of covered medications without much negotiation on price with manufacturers. Drug-pricing trends were fairly predictable, as branded medications were being replaced by generic alternatives.

"The leverage that that kind of system creates to have real, substantive negotiation with the pharma industry on a systematic basis is very, very small. Almost zero," Mr. Miles said.

Then came the rise of specialty drugs and so-called biologics – treatments made from living cells – with health benefits that include cures to chronic diseases such as hepatitis C. But the sticker shock of hundreds of thousands of dollars for some of these treatments has been intense and unpredictable for payers, especially since nearly two-thirds of drugs under development by the pharmaceutical industry are high-cost specialty drugs. More traditional medicines are also coming to market at higher price points.

Manulife says its turning point came when the total spending on new high-cost drugs in 2014 climbed to between eight and nine times more than it was in 2013.

"If that had been a one-year spike, okay," Mr. Miles said. "We look at the pipeline now of drugs coming into the market and that represents, more than likely, the new reality in the Canadian drug landscape."

The scrutiny of drugs in the DrugWatch program will give Manulife more leverage to negotiate prices with drug manufacturers, the company said.

DrugWatch has four phases. First, clinical trials are monitored and any drugs deemed to have a "material net new financial effect" on plans are identified. Next, these drugs are screened for their expected cost. Those deemed to pose a significant financial risk go on to be evaluated for their advantages and cost-effectiveness compared to other available options. Finally, a decision is made whether the drug offers real value and can be listed for coverage, listed with conditions, or not listed at all.

Already, the company says a "handful" of drugs have entered the evaluation phase. Reviews take an average of six months, during which time the drug will not be eligible for reimbursement. DrugWatch uses public assessments done by the Canadian Agency for Drugs and Technologies in Health (CADTH), a not-for-profit organization developed and used by federal, provincial, and territorial governments.

Manulife says some employers were demanding the company take action. "Sponsors were asking us, 'what are you doing about the drugs coming on the market? We're not just going to be exposed to those, are we?'" Mr. Miles said. He added that high-cost cancer drugs raised concerns, as did new cholesterol-lowering medicines that are projected to cost about $14,000 (U.S.) per patient, per year.

The program is unique in Canada in that it will be the standard process for all Manulife's clients, without them opting in or out.

DrugWatch is the latest example of the steps being implemented to stop the costs of drug benefits plans from rising too quickly. Employers across Canada have been adjusting the depth of coverage they offer over the last few years. Some efforts have included cutting the portion of prescription costs they will reimburse and having employees share in premium payments through paycheque deductions. 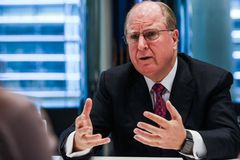