A new front is opening up in the coffee wars.

McDonald's Restaurants of Canada Ltd. is launching on Wednesday its first standalone McCafé in a bustling concourse at Toronto's Union Station, betting on luring younger consumers with a wider offering of healthier-sounding products, an all-day breakfast and no hamburgers and fries.

In a move that distances itself from its core fare and aims to achieve higher café-style profit margins, the U.S.-owned restaurant chain is taking on the top coffee player in Canada – Tim Hortons – as well as Starbucks, which ranks third after McDonald's.

Already, McDonald's over the past five years has made a big push on its coffee business, putting the heat on Tim Hortons.

"I think we pumped some blood back into the coffee business," John Betts, chief executive officer of McDonald's Canada, said as he took a seat at a white marble-looking Corian table at the new café.

"I know that we tripled our coffee servings in restaurants. We've doubled our market share. That's coming from somewhere."

McDonald's Canada, one of the bright spots at the challenged global parent, is staking its new business on higher-margin coffees and quinoa-edamame-mandarin salads to meet the shifting demands of younger customers in a sluggish fast-food sector.

The move comes as coffee remains the top consumed product at restaurants while items such as French fries are in decline, said Robert Carter, executive director at researcher NPD.

McDonald's also is betting more on breakfast fare, the fastest-growing of all "day parts" in the sector, he said. The breakfast business has become so important that, south of the border, McDonald's recently expanded all-day breakfast at all its restaurants.

In Canada, Mr. Betts is focusing on the standalone McCafé, having almost tripled the overall chain's coffee sales since he took the top job in 2008 and doubled its out-of-home coffee market share to 11.5 per cent, he said. It currently has a McCafé inside most of its 1,400-plus restaurants.

"Other coffee competitors should be concerned," said Jeff Dover, principal at food service consultancy fsStrategy. "McDonald's has great awareness and has been very successful in converting customers who try their product. ... The relatively low capital cost would make McCafé a threat to Tim Hortons and Starbucks and the like."

Mr. Betts said the new standalone McCafé is about one-quarter the size of a standard McDonald's, with lower costs because of its size and simpler cooking methods. It is introducing new menu items such as a sriracha pulled beef sandwich ($6.99), a brie and apple sandwich on an "authentic" French croissant ($5.49), a lentil and sweet potato hummus wrap with kale ($5.99) and a fresh banana ($1). The Egg McMuffin is now cooked with butter rather than margarine, he noted.

Mr. Betts wouldn't say how many standalones he envisages beyond the Union Station location and another in downtown Toronto in January. "I believe that this concept, based on the success we've had with coffee, can be a fairly significant size." He said the concept is unique for McDonald's. In Australia, the chain late last year launched a standalone upscale café called the Corner, but it wasn't a model for Canada, he said.

The business is "still growing at quite a healthy pace, despite the penetration and the strength that the Tims brand enjoys in our home market," Daniel Schwartz, CEO of parent Restaurant Brands International Inc., said in October. "... We don't see ourselves slowing down any time soon."

Starbucks is racing to introduce digital conveniences, including mobile ordering and payment. It plans to offer beer and wine at some of its cafés in the evenings. The new McCafé, for its part, has self-ordering kiosks and mobile-device charging stations.

"I think we're going to attract people who are looking for the café experience," Mr. Betts said. "I believe we're going to get a whole new group here that don't come to McDonald's that often at all. This is new territory."

A new kind of fare

The new standalone McCafé is not your grandmother's McDonald's. It offers an array of foods and drinks that isn't customary fare at McDonald's, such as "artisan" sandwiches and croissants from France that are baked fresh at McCafé. Here are some examples: 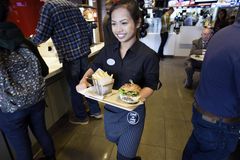 Coffee roaster pours it on with new revenue streams
October 21, 2015 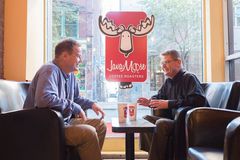