McDonald's Restaurants of Canada Ltd. is going upscale, one customized burger at a time.

The fast food giant is introducing digital kiosks at its restaurants to allow customers to order premium hamburgers from almost 30 options, including five types of cheese, while adding greeters and servers to bring the food to the table.

It's part of an array of initiatives this country's second-largest restaurant company is investing in to sway people to come more often to their outlets – especially at lunch and dinner, when fewer consumers head out to eat than in the past.

"We're going to turn things upside down," John Betts, chief executive officer of McDonald's Canada said as he showed off the new kiosks and added staff at an east-end outlet on Wednesday.

The efforts are bound to stir a buzz but the added touches also come with a price. Mr. Betts digitally ordered a $9.26 Angus True Blue & Guac (blue cheese and guacamole) burger with fries and iced coffee (with an extra espresso shot) for a total of $12.46. The custom burger prices at the kiosks are more than 15 per cent higher than those of a regular Big Mac. A burger conceivably can cost as much as $50, depending on the extras.

In a slow-growth industry that is grappling with heightened competition from pricier casual restaurants and gourmet burger chains, McDonald's is betting that adding more service and offerings will draw consumers who may be tempted to stray to rivals.

U.S. parent McDonald's Corp., which has struggled for years in its core business, has had some success in other markets with rolling out digital kiosks: In France, customers spend on average about 30 per cent more at the kiosks, Mr. Betts said.

At the digital machines, customers feel less rushed about making their choices than at the counter, often prompting them to order more, he said. And they pay with a debit or credit card rather than cash, which tends to result in them spending more, he said.

Digital ordering also often removes inhibitions that customers may have in ordering food from a person rather than a computer, said Avi Goldfarb, a marketing professor at University of Toronto's Rotman School of Management.

His research has found that people tend to order more complex and higher-calorie items when ordering digitally, adding more toppings to a pizza, for example. "They're essentially not embarrassed," Prof. Goldfarb said.

Restaurants can also benefit from more accurate and efficient ordering when it's done digitally, he said.

McDonald's Canada is spending more than $200-million over the next two years to add the kiosks and extra staff to about 1,000 of its 1,400-plus restaurants. It entails adding 15,000 new jobs to its current 85,000, he said, insisting the plan is not to eventually replace staff with the kiosks.

It will launch the kiosks, servers and greeters at 20 to 30 restaurants this year, he said.

While McDonald's in Canada has been one of the parent company's best-performing markets, it still feels the heat to draw more customers – especially for lunch and dinner, said Robert Carter, executive director at market researcher NPD Canada.

In the estimated $50-billion Canadian restaurant market, the number of people coming in at supper time has been hit the hardest, down 2 per cent for the year until Aug. 31 from a year earlier, he said.

Instead, they're going out more often for breakfast, although they spend less on that meal than at lunch or dinner, Mr. Carter said. Restaurants have also felt stiff competition from grocery stores, which have beefed up their prepared food takeout offerings over the past few years, he noted. Meanwhile, lunch is the most skipped meal, he added.

And so-called fast casual restaurants, such as Chipotle, are taking a bite from fast-food chains by touting freshly made items to woo a younger and health-conscious consumer, he said.

Now Mr. Betts wants a piece of that fast-casual action.

He said McDonald's has won over customers with new lunch and dinner offerings, such as the premium "Mighty Angus" and salads.

But breakfast has been a clear winner since the chain introduced what it calls a premium blend of Arabica coffee in 2009 and its McCafé restaurant concept.

Now it is stepping up its McCafé bakery format with pastries for up to $1.99 a portion, while previously the chain mainly offered muffins for 99 cents each.

Since Mr. Betts took the top job in Canada in 2008, its coffee sales have almost tripled and it has more than doubled its out-of-home coffee market share, to 11.5 per cent, he said.

The self-order kiosks at McDonald's, which offer "Create Your Taste" burger customization, include 12 toppings (such as guacamole and slice jalapenos,) two types of buns (sesame seed brioche-style and artisan-style bakery roll), a lettuce wrap and nine sauces (such as chipotle aioli and grainy mustard). Customers who place their order can wait at a table for staff to deliver their fare to them.

"Offering the premium products and the espresso beverages allows people to spend a little more time here and be a little less rushed," Mr. Betts said. 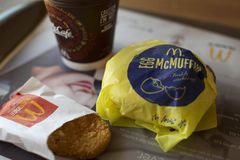