Nadir Mohamed raised billions of dollars on Bay Street when he was CEO of Rogers Communications Inc. So when he set out in 2015 to secure $25-million for a venture-capital fund to finance domestic tech startups, he knew who to hit up: Friends and colleagues at the helm of corporate Canada. It didn't take him long.

"I was a pushover," Royal Bank of Canada chief executive officer David McKay said of Mr. Mohamed's visit in early 2015 to ask for $5-million for his ScaleUP Ventures. "He had the right model, the right concept. [I said], 'This is great, we're in.' It was one meeting."

"The genesis of the fund was to say, 'How do we get corporate Canada to be active working with startups?'" Mr. Mohamed said of ScaleUP, which is on track to exceed its $75-million fundraising goal this year, including $25-million from the Ontario government. "It was never a pitch to corporate Canada to help startups. It was, 'Both parties are going to gain from this.'"

Securing a relative pittance from Canada's corporate elite may not seem like much. However, in the Canadian tech world, Mr. Mohamed's feat of gaining commitments of money, time and effort from the mighty to help the minuscule is "shocking," said Matt Roberts, a ScaleUP partner who witnessed many Canadian venture funds struggle to raise money when he worked for the Business Development Bank of Canada's IT Venture Fund. "I haven't seen anything quite like it, not with that calibre" of backers.

ScaleUP is a unique experiment. Corporate Canada has been stingy when it comes to investing in, or buying from startups. Many retreated from the Canadian venture scene after being stung by the dot-com bust and witnessing the downfalls of Nortel Networks Corp. and BlackBerry Ltd.

That has been changing, as they try to stay apace of widespread disruptions that threaten to upend their industries' competitive dynamics. RBC, Power Corp. of Canada, Intact Financial Corp. and other financial-services giants have begun investing in "fintech" startups. Oil-patch heavyweights Cenovus Energy Inc. and Suncor Energy Inc. recently backed a new $100-million clean-technology venture fund, Evok Innovations. "Right now there's a deep understanding [among established corporations] of the risk of not actually being part of this," Mr. Mohamed said.

Mr. Mohamed, who delayed the launch of ScaleUP after battling an undisclosed illness in 2015, is the first to acknowledge startups are not his forte. He isn't in it for the money – Mr. Mohamed isn't putting his own funds into ScaleUP, describing it as an altruistic effort to give back to Canada. (He's also chairman of and an investors in Alignvest Acquisition Corp., a special purpose acquisition corporation that is merging with Washington wireless telecom operator Trilogy International Partners LLC.)

He's chairing ScaleUP, leaving investment decisions to a team led by former telecom executive and entrepreneur Kent Thexton. (ScaleUP has invested $7-million in six firms so far.) "I'm not the entrepreneur, but what I've learned about entrepreneurs is that everyone needs somebody that can help them scale up. That's where connections are important," Mr. Mohamed said. "I see my role as being a catalyst."

Indeed, since retiring from Rogers in 2013, the Tanzanian-born Mr. Mohamed has refashioned himself as a kindly uncle to Canadian tech entrepreneurs, serving as advisory council chairman for Ryerson University's Digital Media Zone (DMZ) startup incubator and helping to create and chair Ryerson Futures, an accelerator program that invests in DMZ alumni. He's even accompanied entrepreneurs to customer meetings. "He dove headfirst into this when he left Rogers and became a student of the issues and challenges in the space," Ryerson Futures managing director Matt Saunders said.

While the characteristically modest Mr. Mohamed plays down his role, former Ryerson president Sheldon Levy – who came up with the idea for ScaleUP – said his "stature in the business community and his interest brought others on board. It was single-handedly he who created that. I've learned you may as well begin by 'yes' with Nadir. There's no 'no' with him."

One question is whether the CEOs Mr. Mohamed has wrangled will remain engaged; advisory boards often end up being less effective than intended.

So far it seems to be working. After receiving an investment from ScaleUP for his Ottawa billing software company, Fusebill Inc., CEO Tyler Eyamie found himself last October addressing its leadership council high up a Bay Street tower, which led to active discussions with three of their organizations about becoming customers. "When would a company like mine ever get a chance to speak to any of these people?" Mr. Eyamie said. "The answer would be 'never' without the facilitation of ScaleUP."

Opinion
Is fintech a disruptor or enabler for Canada’s big banks?
December 31, 2016 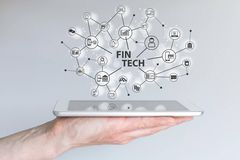