The low-profile Canadian who serves as one of Warren Buffett's chief lieutenants is making a big bet on the economic potential of his home province amid speculation that he might one day succeed the famed investor at the helm of Berkshire Hathaway Inc.

Edmonton-born Greg Abel, 51, presides over Berkshire Hathaway Energy, the power and utility arm of the Oracle of Omaha's sprawling conglomerate. He has earned plaudits for guiding the Iowa-based energy unit on an acquisition binge, including a $3.2-billion deal earlier this month for AltaLink, Alberta's largest electrical transmission company.

More acquisitions may be in the works, he hinted in an interview, given Alberta's rapid population growth and frenetic pace of economic expansion.

"We were excited when AltaLink came up because we just see, truly, a great place to invest and we want to be part of the significant investment that's going on in that province," Mr. Abel said, adding he had been looking for an opportunity to invest in Canadian energy infrastructure.

Mr. Abel's success in the utility business has amplified talk that he could one day take over the top spot at the parent company. He declines to discuss the topic, but Mr. Buffett, 83, has said Berkshire's next leader will come from within the organization, and Mr. Abel is one of a small group of executives who are frequently named by Buffett-watchers as top contenders.

"He's a well-rounded guy and a good deal-maker, and Buffett likes that. But he's also a good operator, and Buffett likes that," said Jeffrey Matthews, a hedge fund manager at Ram Partners LP in Greenwich, Conn., and author of Warren Buffett's Successor: Who It Is and Why It Matters. Mr. Matthews said Mr. Abel is "absolutely" in the running for the top post, although he names Ajit Jain, who runs Berkshire's reinsurance group, as the current favourite.

Berkshire grew famous as the vehicle for Mr. Buffett's canny bets on the stocks of brand-name consumer companies such as Geico, Dairy Queen and Coca-Cola. But as it has grown into a mammoth holding company with a market cap of more than $300-billion (U.S.), it has tilted toward buying entire businesses in areas such as railways and power generation. Mr. Abel, for instance, recently oversaw the purchase of Nevada's largest electric utility for $5.6-billion.

One thing hasn't changed, though: Berkshire still takes a long-term view of its investments. Years ago Mr. Buffett wrote that "our favourite holding period is forever" and that mentality still pervades the organization.

At the utility arm headed by Mr. Abel, the emphasis is on finding properties that can deliver good returns, not just for the next few quarters but for decades to come. Formerly known as MidAmerican Energy, the recently renamed Berkshire Hathaway Energy now has about $70-billion in assets and operates in 11 states, the U.K. and the Philippines.

"We invest in hard assets, so it can be transmission lines, distribution lines, generation assets … and we're sort of a unique owner, because we really intend to own those assets forever," Mr. Abel said.

He described the purchase of AltaLink as a "beachhead" from which the company can "look at other incremental opportunities over the long term."

Those who have worked with Mr. Abel say he also builds relationships intended to last for decades. Dawn Farrell, chief executive officer of TransAlta Corp., met Mr. Abel at the Calgary Stampede 12 years ago, and said he's still the same down-to-earth guy he was then.

Ms. Farrell asked Mr. Abel to partner with TransAlta in 2012 to build natural-gas-fired power plants in Canada. "He took a few days to consider and then said yes … the deal was papered exactly the way we spoke," Ms. Farrell said. One fruit of that agreement, the Sundance 7 power plant in Alberta, is scheduled to come online by early 2019, with the two companies sharing development costs.

Mr. Abel didn't set out to be the CEO of an energy company. He studied accounting at the University of Alberta and became a chartered accountant with PricewaterhouseCoopers after his graduation in 1984. He worked in the company's San Francisco office, before joining CalEnergy, a geothermal electricity producer, in 1992.

CalEnergy was just starting to expand into other energy sources and international markets. Mr Abel led some of the new businesses, such as an electricity distribution network in the U.K. In 1999, CalEnergy acquired MidAmerican Energy and adopted the name of its new business unit. That same year Berkshire acquired a controlling interest in the company.

Mr. Abel took over daily operations at the utility as CEO in 2008. He was vaulted into the spotlight in 2011 when MidAmerican's long-time leader and chairman David Sokol resigned from the company after a controversy over some ill-timed stock purchases ahead of a Berkshire acquisition put him in Mr. Buffett's bad books. Mr. Abel added the chairman's duties to his plate.

Michael Worms, utilities analyst at BMO Nesbitt Burns, said Berkshire Hathaway's long-run viewpoint sets it apart from most publicly traded companies, which typically want to see any acquisition pay off quickly in terms of increased earnings. In contrast, Berkshire Hathaway operates more like a private company and is content to wait a few years for profit to emerge.

Right now, Berkshire Hathaway Energy is making a long-term bet on renewable power. The company accounted for 7 per cent of wind generation capacity in the U.S. at the end of last year, and an even greater share of the country's solar market, Mr. Buffett said in his annual letter to shareholders.

When he's not looking for new investing opportunities, Mr. Abel makes time to travel back to Canada "quite regularly" to visit his mother, who lives in St. Albert, just outside Edmonton, as well as his sister and her family.

Last year he was presented with a distinguished alumni award by his alma matter. "He's friendly and has got a lot of time for students," said Joseph Doucet, dean of the University of Alberta's business school.

"He's still a big hockey fan," Mr. Doucet said. "Someone asked him about coming back to Canada … and he mentioned jokingly that an NHL coaching job might be the only job that could get him back."

Mr. Abel said the country might see more of him when the time is right. "We're just incredibly patient, and when our team finds the right [opportunity] we'll want to continue to invest in Alberta, and Canada," he said. "We take a very patient approach."

Will Buffett’s legacy be a Berkshire breakup?
Subscriber content
May 5, 2014 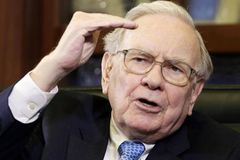 Warren Buffett, we need more belching in the boardroom
May 7, 2014