Metro Inc.'s chief executive officer is strongly denying any wrongdoing by the grocer in a federal bread-price-fixing probe, saying it's extraordinary that the situation has turned into a "marketing event" by rival Loblaw Cos. Ltd.

"We refute the allegations of industrywide collusion," Eric La Flèche told reporters on Tuesday following the company's annual meeting in Montreal. "From what we see at this stage, we haven't contradicted the Competition Act."

It's the first time Metro's senior management has spoken about the Competition Bureau's criminal investigation since it was disclosed last October, raising more questions about the probe that has been generally mired in secrecy.

Last Friday, Ontario Superior Court held a private hearing about documents tied to the bureau's inquiry, but a court officer said the hearing was adjourned to April 4 with no information being disclosed about the issues to be aired. Almost two weeks ago, the court was scheduled to unseal documents that explain why the bureau got search warrants to raid targeted companies' offices last fall, including Metro. But those documents have yet to be released.

Metro is doing its own internal probe into the matter and says it has found no evidence of anything improper.

Loblaw and its parent, George Weston Ltd., shocked the retail sector in December when they said they had been part of what they called an industrywide bread-price-fixing scheme stretching more than a decade from 2001 to 2015. George Weston owns bread producer Weston Foods. Its major rival is Canada Bread Co.

Loblaw and Weston tipped off the Competition Bureau about the alleged conspiracy and agreed to co-operate with its probe in exchange for immunity from prosecution. Even as it admitted guilt, the grocer said it would give out $25 gift cards starting Jan. 8 in an attempt to make amends to its customers.

A judge ruled the company had a right to offer the cards. But Loblaw's rivals are calling the decision peculiar given the circumstances. Sobeys CEO Michael Medline has also lambasted Loblaw CEO Galen Weston for implying that Sobeys acted improperly.

"It's kind of special for sure that a situation like that turns into a marketing event with promotional coupons" by Loblaw, Mr. La Flèche said. "But it is what it is."

No charges have been laid and there has been no conclusion of wrongdoing. Metro has a relationship with both bread makers, Mr. La Flèche said. "We negotiate fair but hard with our suppliers to get appropriate costs and revenues and funds for promotion," he said. "I think we've done our job and we've respected the law."

The comments came as Metro beat earnings expectations for its first quarter, reporting net earnings of $5.67 a share on sales of $3.1-billion. Not counting one-time gains from selling its stake in Alimentation Couche-Tard Inc. and costs associated with its pending takeover of Quebec pharmacy chain Jean Coutu, adjusted earnings per share came in at 67 cents for the three months ended Dec. 23, 2017. Same-store sales increased by 1.2 per cent excluding the impact of the week before Christmas, which last year fell into the second quarter.

"Metro returned to form in [the quarter], delivering better-than-expected underlying results driven by a return to top-line sales growth in excess of inflation," RBC Dominion Securities Inc.'s Irene Nattel said in a note to clients.

Among Metro's hurdles in the months to come is dealing with the effects of Ontario's new provincial minimum wage, which jumped to $14 from $11.60 as of Jan. 1. The wage is slated to climb to $15 next year, making it one of the highest in the country.

Metro estimates the change will add $35-million in business costs this year. Quebec's plan to hike the minimum wage by 75 cents to $12 will be less of a challenge, the company said. To counter the hit, the company has already cut the opening hours of some stores and examined how it can improve the productivity in others.

In the months ahead, it will also rely on technology.

Metro plans to speed up the introduction of more self-serve checkouts, Mr. La Flèche said. Roughly 30 Metro stores in Ontario currently have automated checkouts. The company plans to add seven more by the end of the summer, as well as accelerating the introduction of the technology at its Food Basics stores and outlets in Quebec. 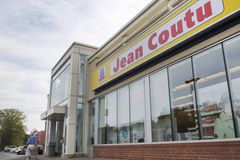