Canada lost ground again last year in auto production and the competition is coming from an emerging powerhouse - but it's not India or China.

Our trade partner to the south, Mexico, has posted the strongest turnaround in North America from the industry's crisis, surpassing Canada in output and turning out a record number of vehicles in 2010.

Vehicle production surged higher across the continent last year from the depressed levels of 2009. But Mexico's impressive growth was driven by something that is not likely to reverse soon - global auto makers' big investments to make small cars in Mexico.

That trend helped Mexico increase its auto production by 44 per cent last year to a record 2.254 million vehicles, figures produced by industry trade publication Ward's AutoWorld show. That number exceeded Canadian production of 2.065 million - the third consecutive year Mexico has done so - and gave that country a record high 18.9 per cent of North American production.

Auto makers operating in Canada held their own by grabbing 17.3 per cent of production, which was the second-highest share on record for this country.

But the statistics underscore how rapidly Mexico has turned itself into an auto making powerhouse that is poised to grow even more during the next few years while Canada struggles to get back to pre-crisis levels of about 2.5 million vehicles.

"We have it pretty clear that after 2012, the gap between Canada and Mexico really widens quite quickly," said industry analyst Bill Pochiluk, president of consulting firm AutomotiveCompass LLC. "It's possible by mid-decade ... that production will begin to approach three million units in Mexico and Canada will still be in the 2.4 million to 2.5 million range."

Mexico has benefited, Mr. Pochiluk noted, from massive investments by Volkswagen AG, Nissan Motor Co. Ltd. and Ford Motor Co. in recent years. Nissan is building its Versa subcompact in Mexico and Ford chose a plant in Hermosillo to build the North American version of its Fiesta subcompact, part of the No. 2 Detroit auto maker's conviction that rising gas prices are going to boost sales of subcompact and compact vehicles during the next few years.

A shift to compact cars in the U.S. market will help Honda of Canada Mfg. and Toyota Motor Manufacturing Canada Inc., which assemble their Civic and Corolla compacts, respectively, in Canada.

There are no other compact cars produced in Canada. Much of the country's auto production consists of larger vehicles such as the Chrysler Group LLC plants that assemble minivans and full-sized sedans, Ford's five-seat and seven-seat crossovers in Oakville, Ont., and full-sized sedans in St. Thomas, Ont. The St. Thomas plant is scheduled to close later this year.

General Motors of Canada Ltd. produces a mix of vehicles such as the compact Chevrolet Equinox and GMC Terrain models, as well as the Chevrolet Camaro muscle car and Impala mid-sized sedan.

The increase in vehicle assembly in Mexico means investment by auto parts makers, including Canadian companies, is shifting south.

"They typically want their suppliers in campuses, even in Mexico," Mr. Pochiluk said of the auto makers.

Magna International Inc., to cite one example, said last week that it now has 29 plants in Mexico, compared with nine in 2001. The Aurora, Ont.-based company has closed 48 plants in Canada and the United States over the past five years.

Martinrea International Inc., a Toronto-based maker of stamped parts and fluid management systems, said it is adding a large number of jobs in Mexico.

Canada can retain jobs, Mr. Pochiluk said, if its parts makers focus on more capital-intensive technologies with a lower labour content, so that high labour costs are less of an issue. 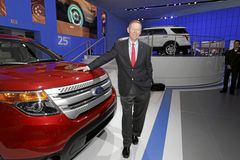