M&M Meat Shops Ltd. is changing its name to M&M Food Market and broadening its offerings as it tries to win back consumers to its frozen fare by persuading them to stock up for an entire meal and not just on meat.

Andy O'Brien, the new chief executive officer of the frozen food retailer, is betting the changes, including more than 100 new products ranging from frozen sushi to fish tacos, can transform M&M into a top-of-mind banner for everyday fare.

His research found the 35-year-old M&M still is a trusted name among consumers but "they want to see some changes," he said. "They would come more often if we were to improve the shopping experience."

Sales at the privately held M&M peaked at an estimated $475-million in about 2008 but today are closer to $400-million after an unsuccessful U.S. expansion and overly fast pace of growth in Canada led it astray.

Still, at a time when currency shifts are boosting fresh food costs, M&M can "leverage the sticker shock consumers are being faced with when shopping for fresh products," said Carman Allison, vice-president of consumer insights at researcher Nielsen Canada.

"With the increasing prices of fresh produce due to the low Canadian dollar, consumers are looking for cost-effective alternatives to fresh produce," he said. "Frozen produce is a way to get the best bang for the consumer buck."

M&M "has a huge challenge," she said. It needs to focus on the convenience of, for instance, being able to quickly prepare frozen veggies without the hassle of washing and chopping them, she said.

Overall frozen food sales in Canada rose 3.5 per cent to $5.5-billion in the 52 weeks ended Feb. 26, according to Nielsen.

M&M aims to bank on those winning categories, Mr. O'Brien said. Over the past 18 months, M&M has added 120 products while dropping about 100 others that were poor sellers and improving 50 items, he said.

It cut in half its 22 different types of burgers, ditching names such as "Bear Paw" and "Butcher's Grind," which consumers didn't understand, and replacing them with options such as Angus and prime rib burgers while adding char-grilled chicken burgers, he said.

It is touting health information on its product packages and in its marketing. It cites research showing frozen fruits and vegetables that are preserved at the peak of their freshness can offer the same or better nutritional benefits as fresh ones.

In November, M&M upgraded its website and click-and-collect e-ordering, which it has been offering for eight years. Shoppers order online and pick up at the store of their choice. The site has enjoyed a 40-per-cent rise in e-orders since the relaunch, Mr. O'Brien said. E-commerce purchases, at $65-plus each on average, are usually more than twice the value of in-store purchases, he added.

The retailer is remodelling its stores to remove the counter that separates shoppers from the freezers, allowing consumers to browse the shelves and check out products, Mr. O'Brien said. The new outlets have the look of a modern kitchen with stainless-steel finishes.

M&M has refurbished five stores since September and will do 50 more this year, he said. It's already seeing early signs that the "tens of millions of dollars" of investments over the past 18 months are paying off: Critical same-store sales rose 1.5 per cent in 2015 and 3 per cent so far this year, he added. Those sales, at outlets open a year or more, are considered an important retail measure. By the summer, it plans to introduce television ads for the first time in eight years.

He has ambitious plans to expand M&M to 500 stores by 2019, especially in Toronto, Vancouver and Montreal, from 370 today after the chain closed almost 100 over the past few years. "It's a category that is worthy of investment," Mr. O'Brien said.

His research showed it's a myth that the home meal is dead, he said. It found that 72 per cent of households prepare at least four meals a week at home, while almost all of them had made frozen food purchases. But consumers' tastes have changed over the past two decades while their food preparation skills have lagged. It all points to opportunities in the frozen food segment, he said.

The latest M&M makeover "signals to the consumer that we have a much broader portfolio than just meats," Mr. O'Brien said. 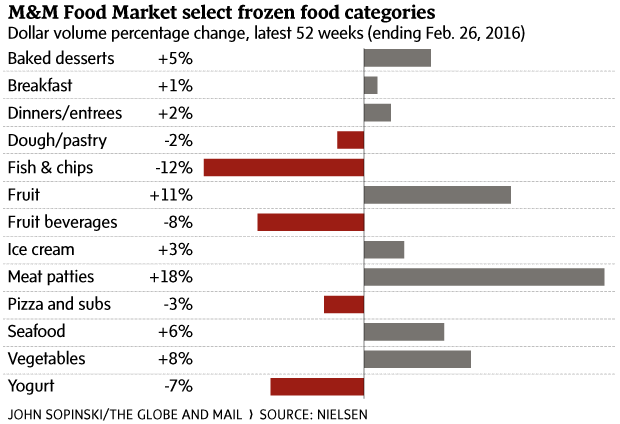 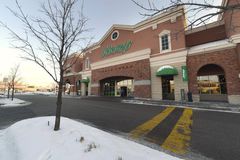 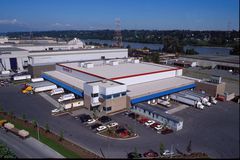