A Canadian insurance company has developed a mobile app that purports to evaluate a user's driving behaviour and offer discounts on their premiums if their skills are up to snuff.

But at least one privacy lawyer is urging caution when downloading the Ajusto app developed by Desjardins Insurance.

Desjardins says iPhone and Android users can download Ajusto for free to have it start scoring driving performance.

The company says Ajusto's score is calculated by monitoring a driver's speed, smoothness and travel distance, as well as logging what time of day the user is most often on the road.

Privacy lawyer David Young says drivers shouldn't start using the app before understanding what they may be getting into.

He says users should be very clear on what purpose their personal information will be used for, as well as how Desjardins plans to keep it secure and for how long.

Young adds that Ajusto's developers could be doing more to make sure customers are well informed when they sign up.

He says a review of Desjardins' own privacy policies suggests that the company is in compliance with federal regulations on app use, but he believes users should look at the bigger picture when allowing mobile devices to monitor behaviour as personal as driving patterns and travel times and locations.

"Desjardins is not going to use this data except for very specific purposes, but if somebody else gains access to it, what are the implications of that?" Young said in a telephone interview. "The more data there is, the more risk there is."

Desjardins did not immediately respond to a request for comment on its retention plans. A description of the app on the Ajusto website states that users will never be financially penalized for a low driving score and could save up to 25 per cent on their insurance premiums if they perform well.

Young said Desjardins should be doing more to highlight the potential risks associated with Ajusto.

Currently users do not see any privacy details until after they've entered an e-mail address into the program. A privacy policy is then available, but it's found in the middle of a lengthy terms and conditions document that users must agree to abide by before they continue.

Young said a better approach would be for the company to highlight the privacy policy separately and make it available much sooner in the signup process. A link to the company's general policies on security practices and data storage would also be a valuable addition, he added.

Making such information available up front would bring the company in line with advice that some of Canada's privacy commissioners offered to app marketplaces last December.

Federal watchdog Daniel Therrien, as well as his counterparts in Alberta and British Columbia, were among 23 privacy commissioners around the world who signed an open letter calling for entities such as the Apple App Store and Google Play to display privacy details of their merchandise more prominently.

"Given the wide range and potential sensitivity of the data stored in mobile devices, we firmly believe that privacy practice information (for example, privacy policy links)should be required (and not optional) for apps that collect data in and through mobile devices within an app marketplace store," the letter reads. 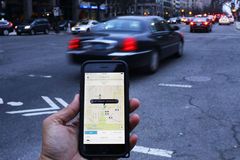