The issue before the court was one of national importance: Which company's beer ads will dominate hockey broadcasts – Labatt's or Molson's?

Molson won the right Tuesday to spend about $375-million over the next seven years on its National Hockey League sponsorship across North America after the Ontario Court of Appeals dismissed the complaints of the league's former Canadian sponsor, Labatt Breweries of Canada.

For the country's two biggest brewers – neither of which is Canadian-owned – the stakes in the fight over the NHL sponsorship rights have become much bigger than just Hockey Night in Canada. In the age of social media, Molson intends to use the sponsorship to integrate its Canadian brand more than ever in the lives of drinkers.

And the massive effort, under which the brewer will spend tens of millions of dollars each year promoting Canadian, will illustrate one central truth: That no matter how the tactics and strategies of advertising change, hockey is still the best way to sell beer.

"The NHL and the access it provides to Labatt ... is the single greatest opportunity to grow Labatt's share in Canada," Kyle Norrington, the marketing director of Budweiser and regional brands for Labatt in Canada, wrote in an affidavit filed with the Ontario Superior Court. "There is no other substitute for this national access to these consumers. The nexus of sports / heritage / emotional / tradition in hockey has no other Canadian comparable."

And Molson is betting the magic will work on the other side of the border, too. For even as one NHL team has fled back to Canada after a failed sojourn in the U.S., Molson believes hockey is close enough to the hearts of beer drinkers south of the border that the sport can help sell the brewer's flagship Canadian brand down there.

"It's a great springboard when we start to look at how we expand and grow that brand south of the border," noted Adam Moffatt, a Molson spokesman.

The brewery intends to use the sponsorship rights to cement its brand with drinkers on social media and through special NHL events like the Winter Classic and the Stanley Cup playoffs, much as the beer became synonymous with chaotic wintry fun during last year's Vancouver Olympics with its Molson Canadian Hockey House.

That approach "creates clear ownership (of hockey for the brand)," noted David Kincaid, the president of Level5 Strategic Brand Advisors, and a former marketer with Labatt. "So when I think NHL Hockey, I think Molson Canadian."

Molson, which had owned the league sponsorship rights for decades before Labatt snatched them away in 1997, hopes that will work in both the U.S. and Canada.

"NHL hockey is – let's face it, it's the pride and joy of the country from a beer drinker's standpoint," Mr. Kincaid said. "So I get the association of the primary property in the consumer's mind attached to my brand – and vice versa. It's all about being relevant, it's about being engaging, and it's about creating value for the consumer, for the broadcaster, for the league, for the brand owner."

After Labatt failed to sew up an extension of its sponsorship rights within an exclusive negotiating window last winter, the NHL turned to Molson. The Ontario Superior Court ruled in favour of Labatt's request for an injunction early last month, and Molson took its case to the Ontario appeal court, which overruled the injunction. On Tuesday, Labatt said it was reviewing its options for further legal action.

It also said the loss was not as bad as it might seem, announcing that it had signed sponsorship deals with three individual Canadian teams: the Vancouver Canucks, the Calgary Flames, and the newly repatriated Winnipeg Jets. "People cheer for leagues a lot less than they cheer for teams," said Bob Stellick, a Labatt spokesman, who noted that the agreements give the brewer the so-called pouring rights in those teams' arenas.

The hockey deal is a mirror of a recent move south of the border, where Anheuser-Busch paid $1.2-billion (U.S.) for the right to make its Bud Light the official beer of the National Football League for the next six years, taking over the title from Coors Light.

Labatt Breweries of Canada may have lost out on its bid for the rights to sponsor the NHL, but on Tuesday it announced it had scored new deals for sponsoring three of the league's Canadian teams, including its newest club and the Stanley Cup finalist. Here's a breakdown of the brewery-team matchups:

The $375-million deal, which runs seven years, reportedly includes the following expenditures: approximately $100-million for the rights, $100-million in guaranteed advertising buys, and $100-million in so-called activation, which includes costs for the events and special promotions staged by Molson to capitalize on its rights. 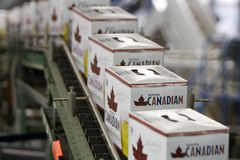 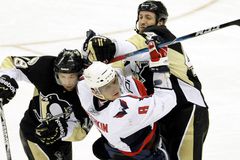 ROB Magazine
Jets owner: if we couldn't make money, we wouldn't have got into this 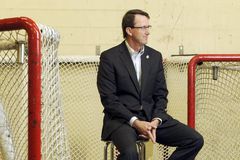 Follow Simon Houpt and David Shoalts on Twitter @simonhoupt @dshoalts
Report an error Editorial code of conduct
Due to technical reasons, we have temporarily removed commenting from our articles. We hope to have this fixed soon. Thank you for your patience. If you are looking to give feedback on our new site, please send it along to feedback@globeandmail.com. If you want to write a letter to the editor, please forward to letters@globeandmail.com.
Comments