U.S. Commerce Secretary Wilbur Ross is warning that his country will extract "concessions" from Canada and Mexico in renegotiations of the North American free-trade agreement, and that a deal likely will not be finished until late next year.

While U.S. President Donald Trump last month spoke only of "tweaking" the trade relationship with Canada, his point man on NAFTA took a sharper tone in an interview Wednesday with Bloomberg Television.

"The Mexicans know, the Canadians know, everybody knows times are different. We are going to have new trade relations with people.

"And they all know they're going to have to make concessions," Mr. Ross said. "The only questions is: What's the magnitude and what's the form of the concessions?"

For subscribers: The pros and cons of leaving NAFTA behind

Mr. Ross said he and Mr. Trump have a "sense of urgency" on the negotiations, but that practical realities mean talks will not start until the second half of 2017 and will take about a year to complete.

Mr. Trump's nominee for U.S. trade representative, Robert Lighthizer, has not yet been confirmed by the Senate. And the government must provide Congress with 90 days' notice before talks begin. "I'd like to get the results tomorrow, but that's not the way that the world works," Mr. Ross said. He said Mr. Trump's tough talk on trade had sufficiently cowed other countries that they would be prepared to accept a new deal.

"I've told the President repeatedly that he's made my job a lot easier by softening up the adverse parties. What would be better than going into a negotiation where the fellow on the other side knows he has to make concessions?" Mr. Ross said, adding later: "It's not going to be a shooting war. If people know you have the big bazooka, you probably don't have to use it."

Canada has been working hard to convince the Trump administration, Congress and U.S. business that an open market is beneficial to both countries and must be maintained.

As part of that campaign, Prime Minister Justin Trudeau will speak Thursday in Houston at the CERAWeek energy conference, which attracts corporate executives and leading politicians from across the U.S.

The Liberal government has highlighted Canada's role as the leading source of American energy imports, including oil, natural gas and electricity. In Houston this week, Canadian officials distributed a pamphlet detailing the trade relationship and stating that "Canada's resources drive American prosperity."

In an interview, Natural Resources Minister Jim Carr said he has spent the week meeting with energy executives who do business in both countries. He spoke twice to different sessions, while Alberta Premier Rachel Notley participated in a discussion on energy and the environment.

All of the executives whom he met proclaimed themselves to be free traders, Mr. Carr said.

"They all agree that the integration of the energy sector in Canada and the United States is in the interest of both countries," said Mr. Carr, who told the conference that NAFTA "has worked and worked well."

"The Canada-U.S. trading relationship supports millions of middle-class jobs and growth on both sides of the border. We are the No. 1 customer for the majority of states, and in the top three for 48 states," Alex Lawrence said. "As the minister has said publicly, no negotiations are under way. We will continue to advocate for our national interest."

The Canadian embassy in Washington also would not respond to Mr. Ross's comments, referring inquiries to Ms. Freeland.

Mr. Ross steered clear Wednesday of specifying what exactly he will seek at the negotiating table, and whether he would push for separate bilateral deals with Canada and Mexico or pursue a single NAFTA deal with all three countries.

Mr. Ross would say only that he would like to add "several chapters" to NAFTA and cited updating the deal to include language on the digital economy – a relatively uncontroversial proposal.

Asked whether he feared clamping down on imports would start a trade war, Mr. Ross replied: "Well, we're in a trade war. We've been in a trade war for decades – that's why we have a deficit. The difference is our troops are now coming to the ramparts." 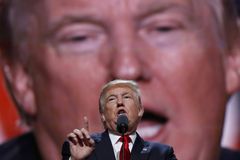 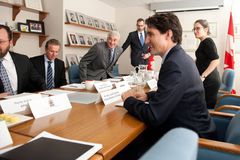 Follow Adrian Morrow and Shawn McCarthy on Twitter @adrianmorrow @smccarthy55
Report an error Editorial code of conduct
Due to technical reasons, we have temporarily removed commenting from our articles. We hope to have this fixed soon. Thank you for your patience. If you are looking to give feedback on our new site, please send it along to feedback@globeandmail.com. If you want to write a letter to the editor, please forward to letters@globeandmail.com.
Comments