Canadian newspaper publishers scrambling to get their news online face a stark reality - more than half of their readers still rely on printing presses and newsprint for their daily news hit.

A study by the Newspaper Audience Databank examined stats from 62 Canadian weekly and daily newspapers and found that 58 per cent of readers only read print and that print readership has held steady over the last several years.

The study underlines the challenge facing the publishers, who are trying to monetize web traffic while not alienating their core base of readers who are far more profitable. A recent Pew Research Center's Project for Excellence in Journalism study found that for every $1 they are gaining in online advertising, they are losing $7 in the printed editions.

Yet only 9 per cent of Canadian readers surveyed relied solely on the Internet for news, and 78 per cent said they typically read both print and online editions.

And while advertisers increasingly focus on how much time online readers spend on a site because it affects how likely they are to notice their products, the study shows that readers were far more engaged with printed newspapers where they spent nearly twice as much time reading than they would online.

In Toronto, for example, a reader spends 211 minutes a week with a paper and only 46 minutes on news websites.

When they do read online, 68 per cent Canadians are still most likely to do so with a computers. Only 3 per cent reported using a smartphone (the remaining 29 per cent used both).

"While computers are still the primary means to access news, access via other devices continues to grow, particularly in the younger age groups," the report stated.

The report showed the Globe and Mail's weekday newspaper readership rose 5 per cent year-over-year to 992,000, including a 24-per-cent increase in Vancouver, and 3 per cent in Toronto. Saturday readership is up 3 per cent to 1,101,000. NADbank also showed a jump for traffic at globeandmail.com, increasing by 13 per cent to 1,494,000 average weekly readers.

* Increase in readership on newspaper websites continues to drive readership to printed editions and offset the general decline in print readership.

* Printed editions continue to be the most popular format with Canadians.

* Readership of free dailies remains stable and popular, but reach remains lower than for paid dailies.

With younger readers heading for online news, papers are anxiously exploring new revenue models such as the metered paywall employed by the New York Times. But the Pew study of U.S. papers blamed "cultural inertia" for an industry-wide inability to seize new revenue opportunities. The industry is caught in a trap, the report stated, where declining print revenues provide most of the money but digital revenue is the only category seeing growth.

"The shift to replace losses in print ad revenue with new digital revenue is taking longer and proving more difficult than executives want and at the current rate most newspapers continue to contract with alarming speed," the report stated, adding that the executives they interviewed considered replacing print revenue an "existential" issue.

The biggest challenge, the report stated, is that managers are convinced print will eventually return to its former glory.

"Newspaper executives described an industry still caught between the gravitational pull of the legacy tradition and the need to chart a faster digital course," the report stated. "A number of them worried that their companies simply had too many people – whether it be in the newsroom, the boardroom or on the sales staff – who were too attached to the old way of doing things."

Globe readership grows, both for print and online
September 28, 2011 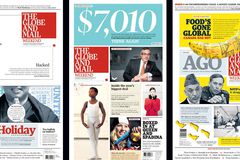 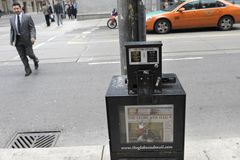 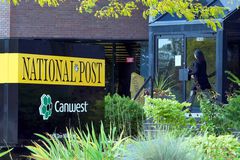