Silicon Valley startup funding powerhouse AngelList is coming to Canada, announcing it has received regulatory approval to launch a platform in Ontario that will provide early-stage financing to startup companies.

AngelList brings together syndicates of sophisticated angel investors to connect them with young companies in search of financing. The U.S. company has helped over 1,000 startups – including Cruise Automation, Dollar Shave Club and Shyp – raise $455-million since its inception in 2010.

The Canadian program will fast-track funding for venture companies working through the Creative Destruction Lab at the University of Toronto's Rotman School of Management, as well as companies working with startup promoter NEXT Canada, but will also be available to other small Ontario-based firms seeking capital.

Former technology investment banker Alex Norman, who will head AngelList Canada, said there has been more money coming into Canada's technology sector, but there is still need for a program like AngelList to help very early stage ventures get off the ground.

"It's still relatively difficult to raise a seed or pre-seed round," said Mr. Norman, who is also managing director of industry group TechToronto. "This will make it more efficient [for early-stage startups] to get capital from outside their local market."

Mr. Norman said he wants to contact other provincial regulators and expand the program nationally if the Ontario initiative goes well.

"We have an underappreciated startup technology scene across the country," he said.

AngelList allows an existing angel investor to use the platform to find others willing to join a syndicate of investors. It is aimed at accredited investors who meet AngelList's sophistication screening, which means they are already knowledgeable about technology-oriented startups. There are no listing fees, but AngelList gets a 5-per-cent share of the value created.

The program is efficient for young companies, which typically face a labour-intensive process to raise money from numerous individual investors, said Andrea Johnson, a Canadian lawyer working with AngelList. She said its founders concluded there was no reason for the process to be so difficult.

"In a typical startup spirit, you had a bunch of people asking, 'Isn't there a better way to do this?' " Ms. Johnson said.

The AngelList initiative was approved by the Ontario Securities Commission under its new LaunchPad program, which was officially launched Monday. The OSC has set up a small group of specialized LaunchPad staff who will work with companies building new fintech businesses at an early stage in their development.

OSC chair Maureen Jensen said the regulator has been approached by a flood of companies developing new businesses – such as crowdfunding platforms and peer-to-peer lenders – whose models did not fit into old regulatory structures.

She said some companies have approached the OSC after already making major technology investments, only to find out their business models did not meet investor-protection requirements.

"You can imagine how frustrating it is if they've already developed everything and they're ready to launch, and they come to us and we say, 'What about investor protection,'" Ms. Jensen said in an interview Monday.

Pat Chaukos, who heads the LaunchPad program at the OSC, said many online financial and investment platforms want "frictionless" platforms where users are not required to leave the site to, for example, complete or sign separate paper forms.

"Our regulatory framework was developed at a time that was paper-based, so how do you apply that when you're dealing with an online environment. It is difficult for these firms to comply in the traditional sense," she said.

To be more flexible, the OSC said it will provide time-limited registrations in some cases, allowing companies to test models, or will give exemptions from certain requirements that do not fit their model.

Ms. Johnson, a technology partner with Dentons in Ottawa, said the OSC LaunchPad program has already significantly increased the pace of approvals, moving AngelList through its approval process in about a month.

She said the benefit of LaunchPad is that startups are not being asked to devote years to getting regulatory approval for a business model without knowing whether it will be successful.

"It was highly collaborative, extremely fast and very flexible without losing sight of investor protection," she said. 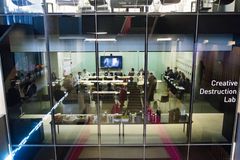 Innovation centre opens in heart of Vancouver’s startup community
October 14, 2016
The new (non-tech) tech luminaries
October 17, 2016
Mistral Venture Partners raising second tech VC fund
October 17, 2016
Follow Janet McFarland and Sean Silcoff on Twitter @JMcFarlandGlobe @SeanSilcoff
Report an error Editorial code of conduct
Due to technical reasons, we have temporarily removed commenting from our articles. We hope to have this fixed soon. Thank you for your patience. If you are looking to give feedback on our new site, please send it along to feedback@globeandmail.com. If you want to write a letter to the editor, please forward to letters@globeandmail.com.
Comments