Companies that ship oil by rail will be required to pay into a compensation fund set up to cover the costs of a derailment, the federal government announced on Friday.

The legislation, which is a response to the 2013 tragedy in Lac Mégantic, will ensure victims of oil train crashes are compensated for losses and that municipalities can recover the costs of cleaning up spills and fighting fires while giving the government new powers to enforce safety regulations, Minister of Transport Lisa Raitt told reporters.

Here are the highlights of the legislation, called the Safe and Accountable Rail Act:

> Companies that ship oil by rail must pay a $1.65-a-tonne fee that is pooled in a fund intended to cover the costs of damages that exceed railways' insurance.

> Railways, for the first time, must carry a minimum amount of liability insurance based on their volume of dangerous goods. The amounts range from $25-million up to $1-billion.

> Railways will be required to implement policies and procedures that will ensure workers can report fatigue without fear of reprisals.

"Everything that we have announced today has been in reaction to Lac Mégantic," Ms. Raitt told reporters.

Pauline Quinlan, chair of the Federation of Canadian Municipalities' rail-safety committee, called the compensation fund a key way to protect taxpayers from bearing the costs of a company's mistake, but also wants shippers of other dangerous commodities to pay fees.

Ms. Quinlan is mayor of Bromont, Que., a town on the same railroad as Lac Mégantic. The trains are running again through her town, and she said the new operators, Central Maine & Québec Railway, have agreed to share information about which dangerous goods it is moving.

"There has not been a large volume of dangerous goods [lately] but as their operation is going to pick up, it is very important that we are kept secure so that our municipality does not have to pay the cost of any incidents," she said.

The amount of oil moving by rail has soared in the past two years as new oil production, especially in the Bakken region of North Dakota and the Canadian Prairies, faced a lack of pipeline capacity. In 2014, railways in North America pulled more than 1.2 million tank cars of oil, a 12-per-cent rise from 2013, a year that saw a 31-per-cent rise from 2012, the American Association of Railroads said.

Ms. Raitt said the government did not anticipate the rise in volumes, and noted many of the recent costly derailments have involved large trains that carry great risks if a crash occurs.

There have been several recent fiery derailments of oil trains, including a Canadian National Railway Co. wreck on Sunday in Northern Ontario.

But dangers of moving oil by train were highlighted in the Lac Mégantic disaster, when an unmanned Montreal, Maine and Atlantic railway train carrying volatile Bakken oil derailed and set much of the town ablaze, killing 47 people.

The MM&A said in bankruptcy filings it carried just $25-million in insurance, far short of the estimated $400-million cleanup costs.

The Railway Association of Canada said shippers of other dangerous goods, such as chlorine, should be required to pay into the compensation as well, something Ms. Raitt said could happen at a later date.

Malcolm Cairns, a former CP executive and government bureaucrat who researches and writes about rail regulations for the think tank Macdonald-Laurier Institute, said the government is taking a sensible approach to spreading the risk of freight ship beyond the railways. "Some of the commodities they ship, the risk is extremely high. I think the railways have been interested in sharing that risk but the shippers did not want to," he said in an interview. 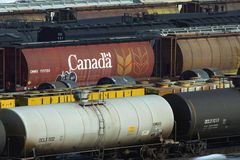 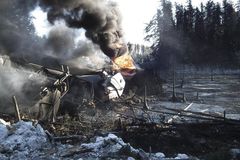