Postmedia Network Canada Corp. Chief Executive Officer Paul Godfrey has called his company's U.S. dollar debt a noose around the newspaper publisher's neck. Investors are betting he may soon escape it as a restructuring looms.

Postmedia's $222-million of bonds, which have second place in the company's capital structure, have fallen to 14 cents on the dollar from more than 71 cents in January, according to data from the U.S. Financial Industry Regulatory Authority's reporting system. That price suggests the market is bracing for a debt restructuring that could force lenders including Allianz SE and Riverpark Advisors LLC to take substantial writedowns, convert the bonds to equity, or wipe their investment out altogether.

"It's telling you it's highly likely this bond will be restructured and become new equity, so the existing, current equity holders have been annihilated," said Paul Tepsich, founder and portfolio manager at High Rock Capital Management Inc. in Toronto, which owns some of Postmedia's higher-ranking Canadian dollar notes that he says trade at about 87 cents on the dollar. "It gives them a longer runway to survive or to rejig the business more."

The plunge in Postmedia's 12.5 per cent bonds maturing in 2018 suggests ownership of Canada's largest newspaper chain will pass to its lenders following a restructuring. Whatever deal is cut would have to ensure the first-lien bondholders, led by Richmond Hill, Ontario-based Canso Investment Counsel Ltd. get paid first while the second-lien noteholders, including Allianz, would get whatever is left.

While painful for bond investors, a restructuring would provide some interest payment relief to Postmedia. In a January interview with the Canadian Press, Godfrey singled out the U.S. bonds as particularly "hurtful" because the weaker Canadian dollar made the interest payments more onerous. Since Toronto-based Postmedia sold the bonds in 2011, the debt payments have swollen in Canadian dollar terms by more than 30 per cent.

The rising borrowing costs come amid declines in Postmedia's print advertising revenue at papers including the National Post, Montreal Gazette and Vancouver Sun. Its efforts to make money online have failed to offset those drops even with the 2014 acquisition of 175 publications from Quebecor Inc. Last month, Postmedia's largest shareholder, GoldenTree Asset Management LP, initiated a sale process for its stake, according to a person familiar with the matter who declined to be identified because the process is private.

GoldenTree was part of the U.S. creditor group that financed Postmedia's creation from the wreckage of a bankrupt predecessor, Canwest Global Communications Corp., in 2010. Because Canada has rules against foreign ownership of its media, the transaction required a dual-share structure, with the majority of voting shares held by Canadian investors including Godfrey, who owns about an 11 per cent stake in those shares. The U.S. financiers hold Class B shares with limited voting rights.

Postmedia's non-voting shares trade at about 6 cents, for a market value of C$17-million. That values Goldentree's 53 per cent stake at C$9-million.

"If you get rid of that debt or significantly reduce that debt I believe the newspaper business is a viable business," said Niko Veilleux, a partner at Montreal law firm Fasken Martineau who represented Quebecor in the 2014 sale. He says a restructuring that converts Postmedia's second-lien bonds into equity would be one way to do that. "This is an industry that's declining, but it's not disappearing."

GoldenTree, a New York-based hedge fund, also holds positions in the first and second lien bonds, according to Postmedia's regulatory filings. Canso Investment owns the majority of the top-ranked notes, the filings show. And of the approximately 53 per cent of the second-lien notes whose owners have to report their positions, 40 per cent are held by Munich-based money manager Allianz Global Investors GmbH, according to regulatory filings made in the 12 months to January.

"The equity is in my mind not worth anything because even the assets the company has, what we value it, is not enough to cover the debt," said Peter Adu, an analyst at Moody's Investors Service, which rates Postmedia Caa2, its fourth-lowest rating. "The debt would be a stretch to be able to refinance at par." 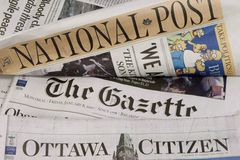 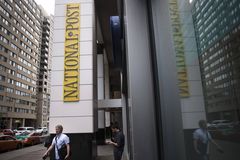 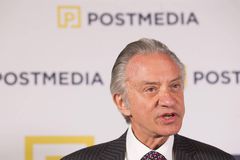 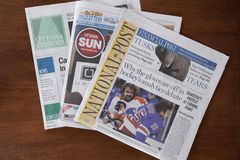 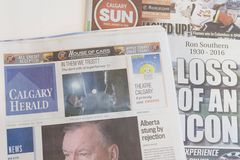