The highly anticipated auction of Conrad Black's Toronto mansion was called off on Tuesday night when a pre-emptive offer landed just as bidding was set to begin.

Participants who had gathered at the Four Seasons Hotel Toronto were left to sip wine and snack on canapés as the clock ticked past the 6 p.m. start time. Less than 10 minutes later, they were informed by a representative of the auction house that negotiations for the sale of 26 Park Lane Circle were under way.

Mr. Black was spotted in the hallways of the five-star hotel, but he mainly stayed out of the limelight, according to guests in attendance.

The author and former newspaper baron divulged last month that his 6.6-acre estate in the exclusive Bridle Path neighbourhood was on the block, and Concierge Auctions of New York announced that it would preside over the bidding, set for March 8.

The Georgian-style house was advertised with an estimated value of $21.8-million on the Concierge website.

Since the auction was announced, prospective buyers who were able to prove their net worth with financial statements were able to book a viewing of the estate's nine bedrooms, 11 bathrooms, indoor swimming pool and coach house.

On Tuesday night, about 20 guests gathered for a 5 o'clock cocktail reception at the Four Seasons. As servers proffered smoked salmon and ricotta balls, bona fide bidders put up a $250,000 deposit to obtain a paddle.

One woman in possession of a paddle was in the room, while guests were told that another would be bidding by phone. The auction house reps announced about 10 minutes before 6 that the auction would soon get under way, according to real estate agent Jimmy Molloy of Chestnut Park Real Estate Ltd., who was invited to attend. But about 20 minutes later the auctioneer announced that a deal was in the works.

Elise and Harvey Kalles of Harvey Kalles Real Estate Ltd. were also on the guest list. Ms. Kalles said guests were surprised when the spirited bidding that had been expected did not materialize.

"It did sell," she said. "The price was not disclosed."

She added that everything was wrapped up by about 7 p.m. and guests were kept well informed. "It was done in very good taste," she said.

Mr. Molloy learned afterward that a third bidder made the pre-emptive offer and that person was the successful buyer.

Guests were then given the opportunity to bid on a case of pinot noir, with proceeds going to the charity Habitat for Humanity.

Selling a high-priced home at auction is common in some parts of the world, but it is still rare in Toronto. A previous attempt to sell an unfinished mansion in the Bridle Path fizzled when the deal collapsed before closing.

Ms. Kalles said a couple of her clients have inquired about going the auction route so she wanted to see the process for herself. "I've never been to an auction where it's done like that. I would have paid $250,000 just to see it," she said.

Ms. Kalles said she still has not decided if the process is best for the clients she represents.

Mr. Molloy thinks that Toronto sellers are still fairly staid. "Auctions may be just a little too flamboyant a way of dealing with real estate," he said. "We are a little bit straight-laced and conservative for that approach."

Mr. Black's heritage property was first purchased by his father, George Montegu Black, about 65 years ago. Conrad Black inherited the estate and undertook extensive renovations over the years. The chapel was consecrated by two cardinals and the dome atop the library was modelled on St. Peter's Basilica at the Vatican.

Mr. Black and his wife, Barbara Amiel Black, are preparing to spend less time in Toronto as they travel more often. At the time of the announcement of the auction, Mr. Black said the couple are downsizing.

Mr. Black was the co-founder of the Hollinger newspaper empire, which held a stable of publications around the world. Titles included The Telegraph of London, the Chicago Sun-Times and The Jerusalem Post.

He and other Hollinger executives faced legal troubles over allegations of misappropriation of funds. Mr. Black was convicted in 2007 of three counts of fraud and one count of obstruction of justice, but later had two of the fraud counts overturned on appeal. He served 37 months in a U.S. prison and was released in 2012, when he returned to Canada.

He had to return under a special temporary permit, having renounced his Canadian citizenship in 2001 so that he could accept a peerage in the British House of Lords.

On his return, the Conservative government of prime minister Stephen Harper was in power. Mr. Harper and the immigration minister of the day, Jason Kenney, were forced to fend off allegations from the legal community that political intervention played a role in the Department of Citizenship and Immigration's decision to give Mr. Black a permit. 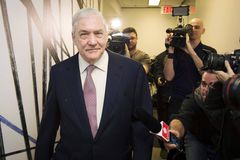 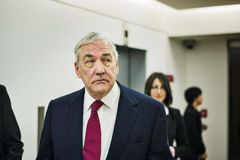 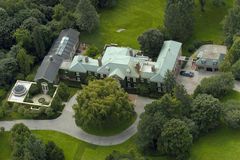