Canada is becoming a country of cheap fashion – and the falling price of clothing is both a boon for consumers and a source of pain for many retailers.

Data compiled for The Globe and Mail show that since 2002, apparel prices fell a dramatic 17.8 per cent, as overall consumer prices climbed 21 per cent over the same period (excluding volatile categories such as food and energy).

Deflation in clothing prices is partly a result of cheaper imports following liberalized trade rules with countries such as Bangladesh and China, which began at the end of 2002 and opened the floodgates to low-cost apparel. As well, cheap-chic fashion purveyors such as H&M of Sweden, Zara of Spain and Canada's Joe Fresh have expanded in this country while U.S.-based discount giant Wal-Mart Canada Corp. bolstered its operations.

The heated competition has prompted rival retailers to shave their prices, offering attractive deals to consumers but threatening the business model of weaker players.

Canadians are getting a bargain for much of their clothing compared to a decade ago, despite frequent complaints that U.S. prices are even lower. But the discounting is straining many clothiers and already forced some out of business. The pressures show no signs of abating as Wal-Mart, Costco Wholesale Corp. and now Target Corp., the U.S. discounter that opened its first Canadian outlets last year, keep adding more stores.

"Perhaps it speaks to the difficulty of retailing," suggested Jeremy Reitman, chief executive officer of Reitmans (Canada) Ltd., the country's largest specialty women's wear chain, whose banners include Reitmans, Smart Set and Penningtons. It has blamed stiff competition and price slashing for declining financial results. In the first nine months of its past fiscal year, Reitmans profit tumbled to $13.3-million from $27.5-million, while sales dropped to $719.7-million from $732.8-million. Profit has been on a declining trend for several years.

The Bank of Canada has underlined the role of intense retail competition in keeping prices down. In a speech this month, the bank's deputy governor, Tiff Macklem, warned that competition among major retailers will continue to depress retail prices "for some time." He suggested that Canadians are enjoying the fruits of cutthroat retail competition and improved productivity as major foreign chains expand here.

But the extent of apparel deflation over the past dozen years surprised even industry insiders such as Mr. Reitman. A compilation of Statscan consumer price index figures found that total clothing prices fell 17.8 per cent for the essentially same basket of apparel goods between 2002 and 2013, with prices falling every single year. The steepest decline came in the prices of children's and infants wear, which slid 25 per cent in that period.

Prices of women's apparel dropped 22 per cent while those of men's clothing held up a little better, slipping 8.8 per cent, with small increases in 2011 and 2012. Some observers believe that is because many cheap-chic retailers do not focus as much on male consumers.

Trendex's Mr. Harris predicts "more of the same" for 2014. On Friday, Statscan will provide a further glimpse into pricing trends when it reports CPI for January.

Mr. Harris anticipates price promotions will continue to pick up and that Target will fix some of its "out of stock" problems in Canada, with its apparel division outperforming its other merchandise categories. He predicts the Black Friday promotional day at the end of November – another recent U.S. import – will become more popular, and the foreign invasion of Canadian apparel retailing will increase although at a slower pace than over the past two years, leaving more incumbent apparel chains in the dust.

Wal-Mart Canada, for its part, has ramped up its apparel offerings over the past decade, putting a priority on reducing prices, particularly in children's wear, said spokesman Andrew Pelletier. For example, in the spring of 2012, it cut prices of many of its children's t-shirts and leggings by one-third to $4 from $6, while slicing prices of some jeans by 17 to 30 per cent, to between $7 and $10 from between $10 and $12. This spring, it is selling boys' t-shirts for as little as $3 apiece.

Still, Wal-Mart has felt a pinch from its initiatives. CEO Doug McMillon said in November that its third-quarter gross profit in Canada dropped as the company trimmed prices. At the same time, "we have realized increased savings from product shipped through direct import channels."

Even some U.S. fashion retailers such as Abercrombie & Fitch Co. and Express Inc. have felt the pressure to reduce their prices as much as 25 per cent in their stores here to promote near or complete parity with those in their home country. "Our efforts in Canada are showing continued improvements," Express chief executive Michael Weiss said last year. 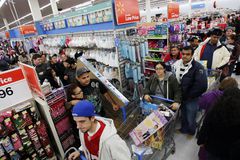