The conference was held in a bland room in a nondescript hotel, tucked in the forest of concrete towers of Montreal's downtown. Yet it had the feel of an intimate family gathering.

This was as close to a Quebec Inc. reunion as you could get.

Disputes sometimes erupt at family gatherings, when underlying tensions crack the veneer of civility. And with his typical bluntness, Mr. Péladeau couldn't resist taking a small shot at Yvon Bolduc, CEO of the labour-sponsored fund Fonds de solidarité FTQ, when he lamented Quebec's low productivity and the province's "protest culture."

While Quebeckers will tear each other apart over everything from independence to the need for a national securities regulator, there was a remarkable consensus in the room: Quebec Inc. believes more should be done to protect Canadian companies from hostile takeovers.

The rest of Canada should pay heed to this. The Quebec regulator, the Autorité des marches financiers (AMF), is not going out on a limb when it argues that it is not enough to merely give companies more time to reflect on their options when faced with an unsolicited buyout offer. Corporate boards, the AMF says, need better tools than that.

The Quebec securities regulator has the full backing of the province's business community. It still hopes to sway the umbrella group of provincial securities regulators, the Canadian Securities Administrators, to consider other takeover defences. Chief among them is the right to reject a takeover offer without submitting it to shareholders (the "just say no" defence) when a board concludes that it is not in the long-term interest of the company.

Mr. La Flèche readily says that a company's stellar performance remains one of its best defences. And Metro is no troubled Rona Inc. – the grocery retailer's dividend has gone up consistently in the past 18 years. Yet even he believes no company is immune to a surprise takeover offer. "For a company with the size and reach of Metro, even 90 days [to deal with a hostile takeover bid] is too short," he said. "It forces you to find rapid solutions such as asset sales or leveraging, and rapid solutions are often wobbly."

Nearly half of Quebec's 50 most valuable companies have neither a controlling shareholder nor the protection of dual-class shares. As such, they are technically up for grabs. SNC-Lavalin, Metro, Dollarama, Gildan Activewear and Osisko Mining are the most important by market capitalization. What is more, only eight of those 24 companies are incorporated in Quebec, where Finance Minister Nicolas Marceau is mulling additional protective measures to prevent the hollowing out of the province's head offices.

"Of all the developed countries, Canada is the place where the boards are the most powerless. Their role is limited to that of an auctioneer," said Yvan Allaire, chair of the Institute for Governance of Private and Public Organizations, which organized Friday's conference.

For Mr. Bolduc of the FTQ, updating the takeover rules to cope with a world of arbitrageurs and other short-term traders is a way to create a level playing field with the United States, where about 30 states have adopted varying measures to shield their companies from takeovers.

So in Quebec, the debate is not about giving companies more ways to oppose a buyout offer, but on the best way to achieve this. Here, as elsewhere, the devil is in the detail. "Hell is paved with good intentions," Mr. Sabia said. "There is always the danger that these [defence mechanisms] could be used to let underperforming companies off the hook, and that would be unacceptable."

Unsurprisingly, the people who exercise control over businesses through a dual-share structure, such as Mr. Molson, Mr. Péladeau and Mr. Audet, approve of the use of multiple voting shares and have no plans to abandon them. "One of the pitfalls would be to have someone like Conrad Black, a controlling shareholder not acting in the best interest of the company," Mr. Molson remarked.

The problem is that once such a structure is in place, a self-serving management is almost impossible to root out, no matter how transparently it purports to act.

Mr. Sabia evokes the need for tighter rules on shareholder votes, with minimal retention periods on shares, to lessen the influence of short-term speculators. "You don't want to give the tourists the right to act as citizens for only five minutes," he said.

There is no easy way to balance the interests of shareholders with those of other stakeholders. But on this issue, it is well worth having a nice family fight. 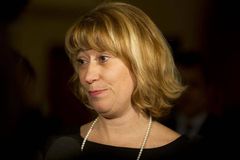