The Quebec department store institution La Maison Simons is betting big on its first store outside of the province – in the West Edmonton Mall – sparing little expense as it begins its Canadian expansion and takes on a wave of foreign retailers.

Simons, which will open the Edmonton store on Wednesday, is pouring $40-million to $50-million into the outlet's development, double its usual budget, including a soon-to-be installed suspended canopy of crystalline columns in a glass cube by Canadian architect Philip Beesley. In the young women's section, at the press of a button, cone shapes descend from the ceiling to form fitting rooms.

The Ghermezian family, which owns the country's largest mall, has also invested about $10-million in the store, raising the stakes further.

"It was a conscious decision to try to make it an exceptional store," said chief executive officer Peter Simons, making no apologies for artistic embellishments. "There are people who question whether our concept can survive outside of Quebec ... I'm out to prove them wrong."

Mr. Simons needs to raise the bar as competition heats up around him. Stylishly affordable U.S. Target Corp. is moving into the West Edmonton Mall next spring, one of its first stores in Canada with more than $10-million of remodelling for each one, while upscale Nordstrom Inc. – a potential West Edmonton tenant – is beginning its 2014 Canadian rollout with a store in Calgary.

Simons, known for an eclectic mix of pricey designer lines and cheap-chic private-label fashions, is gambling that heavy investments today will make it as much a destination in Edmonton tomorrow as it is in Quebec now, luring customers from foreign powerhouses.

"People are not familiar at all with the name Simons – it's an unproven brand in the Alberta market," said Michael Kehoe, a broker at retail adviser Fairfield Commercial Real Estate Inc. in Calgary. "But Alberta shoppers are adventurous. ... If it's in the mall, people will find it."

The shopping centre is helping to spread the word with a $500,000 promotion budget, including a television commercial, magazine ads and a billboard in the Edmonton airport. "We're putting the entire engine of the West Edmonton Mall marketing department behind it," said David Ghermezian, president of the mall.

With annual sales of more than $300-million, privately held Simons expects it can generate $600 to $800 of sales per square foot at the Edmonton store within five years – close to the $800 average at its seven Quebec stores – and a profit in the first year. That is above the North American department store average of $240 (U.S.), including Nordstrom's $431 and the Bay's $133 (Canadian). (Discounter Target's is $294 (U.S.)

But Mr. Simons is aware of the challenges of building his name in Edmonton. "People will have to get to know us."

It helped to team up with an entrepreneurial family such as the Ghermezians who were ready to roll the dice with a locally unfamiliar name and give him a rent break, he said. Conventional mall owners that are controlled by big pension funds are risk adverse, he added. "They can't afford, in that sort of bureaucratic environment, to be entrepreneurial."

Mr. Simons is now looking for store sites in Vancouver, Calgary, Toronto and Ottawa, battling with Nordstrom for coveted space that can be more than 10 times larger than clothing outlets. He envisages as many as 20 stores in the next decade or so, doubling current revenue.

How will he compete against bigger rivals? The Edmonton store features unusual touches, such as mini digital photo studios that allow shoppers to try on items for instant feedback on social media. And technology is allowing smaller retailers such as Simons to make up for fewer economies of scale and boost margins, he said. Multicoloured fabric printing, for instance, costs about 20 per cent of what it was five years ago, no matter how small the production run, he added.

Operators such as Simons can attract staff by allowing them to get involved in the creative process, he said. "It's not just going to be about being the biggest." A few months ago, a saleswoman at one of his stores called him directly to tell him about a trend of open-crochet mohair sweaters she saw on a vacation in Spain. Mr. Simons, who is also merchandise manager for women's knitwear, liked the idea so much he had the sweaters produced and today they are solid sellers.

Big chains such as U.S.-based Macy's now are acting as if they are small, adapting their merchandising to local communities. Simons, on the other hand, plans to bring its Quebec styles to Western Canada, counting on people there to appreciate the retailer's fashion sense.

Mr. Simons is making small adjustments for his Edmonton store. It will carry about 10 to 18 per cent more large and extra-large sizes, and that amount fewer small and extra small sizes, after his research found those differences between the Edmonton and Quebec markets. 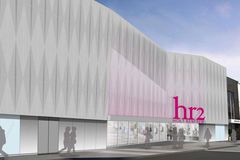