As Quebecor Inc. prepares to ramp up investment in its data centre business, the company has finally laid to rest the question of whether it will build a wireless network outside of Quebec and the answer is "no."

Chief financial officer Jean-François Pruneau told an investor conference hosted by Canadian Imperial Bank of Commerce in Montreal on Wednesday that the company is not considering "building a new wireless network from scratch in the rest of Canada."

His comments Wednesday were in line with what the company has been signalling for months – that it will not risk its balance sheet with an expensive expansion outside of Quebec – while still leaving open the possibility of some type of partnership with Wind Mobile Corp.

Quebecor owns significant spectrum – the radio waves used to deliver cellular services – outside its home province, with licences acquired in government auctions in 2014 and 2015 for a total of about $300-million. , Mr. Pruneau said, adding that he believes they are "definitely worth more than that."

Now the company is considering "transferring the spectrum to a third party for cash, securities or both," he said, later explaining that could mean a sale to one of Canada's Big Three carriers or a sale or partnership with Wind.

"Going with Wind could be cash or could be for securities – then it brings the partnership on," Mr. Pruneau said, adding that Quebecor could bring "value to Wind's operations" through the spectrum licences but also through its expertise and purchasing power for mobile handsets for instance.

But he said a transaction with one of Rogers Communications Inc., BCE Inc. or Telus Corp. could also be possible.

"I think that the Mobilicity transaction has changed the landscape," he said, referring to the federal government's approval this summer of a deal for Rogers to purchase the small carrier.

Ottawa had previously blocked any proposed deal that would see spectrum set aside for new entrants – which is the type of spectrum Quebecor owns – sold to one of the incumbent operators. The Mobilicity deal included the transfer of a swath of spectrum to Wind, which Ottawa sees as its best hope for a sustainable fourth operator in Ontario, British Columbia and Alberta.

"Now it's possible to believe – even on a short-term basis – that transferring the spectrum to an incumbent could be done," Mr. Pruneau said.

In 2014, Quebecor said it was interested in expanding its wireless business to the rest of Canada under the right regulatory conditions – including assurances it would be able to buy roaming services from the national carriers at low wholesale rates – and insisted that it would invest in its own networks as well as seek partnership opportunities.

Canada's telecom regulator has since said it will cap the wholesale rates the Big Three can charge smaller competitors for roaming services.

But Quebecor has increasingly refocused on its home province since then and last week announced a $500-million deal to buy back part of the interest the Caisse de dépôt et placement du Québec still owns in its main subsidiary, Quebecor Media Inc. The company plans to repurchase the balance of that interest – which it currently values at $1.25-billion – by 2019.

Mr. Pruneau said that when it comes to acquisitions, Quebecor's focus for its telecommunications division is now on business services. It purchased 4Degrees Colocation, the largest data centre business in Quebec City, for $31.5-million in March and announced Wednesday that it will invest $40-million in a new 4,000-square-metre data centre in Montreal, set to open in July, 2016.

"Out of the 120,000 companies that we deal with, 65,000 are in Montreal and they're asking for that type of service," she said in an interview Wednesday. As with the Quebec City location, the Montreal facility will offer co-location service – which involves providing data centre space and power for clients' computer servers – but could expand into cloud and other managed services based on demand, Ms. Brouillette said. 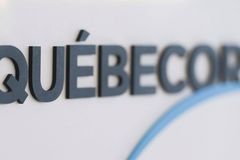 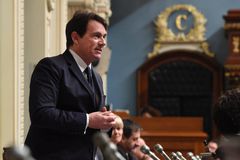 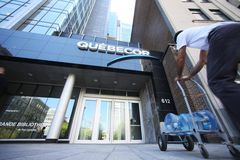