The cauldron of discontent in Quebec's maple syrup industry is boiling over.

A group of so-called rogue producers in the province is vowing to take their fight to the highest court in the land after losing a legal battle to crack open the tightly controlled system that regulates the production and sale of the sticky golden nectar.

A Quebec Superior Court judge ruled last week that the province is within its rights in controlling the out-of-province sale of the product.

Angèle Grenier, a maple syrup producer in Sainte-Clotilde-de-Beauce, south of Quebec City, has been fighting for years for what she says is the right to sell her product as she sees fit and not be subject to what she and others in her group say is a virtual cartel in the province.

In the current system, the 7,500 or so syrup producers work under quotas in the supply management and marketing system of the Federation of Quebec Maple Syrup Producers. The federation says that way, the producers – who must transfer their surplus production into a "strategic reserve" – are assured a decent price for their syrup.

The federation has been known to stage raids on any producers who work outside the system, such as Ms. Grenier.

Ms. Grenier, who confirmed in court that she sold her entire production from 2003 to 2011 to two buyers in New Brunswick and Prince Edward Island, argued that selling products outside the province is subject exclusively to federal laws and that the Régie des marchés agricoles et alimentaires du Québec – the administrative tribunal enforcing the law over maple syrup and other products – has no jurisdiction in that area.

The judge ruled that the tribunal does indeed have jurisdiction. A feisty Ms. Grenier, 56, says she will appeal the decision.

"This is a setback, yes, but we're going to the appeals court and I believe your chances of winning are better there," she said in a telephone interview from her sugar bush, which has 6,000 to 8,000 trees.

"These are my Canadian rights that the federation is taking away from me," said Ms. Grenier, who bought the maple syrup operations in 1993 and says her dream that the revenues would help feather her retirement nest is fading fast.

"Why shouldn't we in Quebec have the same rights as Ontario and New Brunswick, who can export?"

Quebec's share of global maple syrup production is about 80 per cent.

"[The federation has] got producers by the throat," Ms. Grenier said.

Federal Minister of State for Agriculture Maxime Bernier said a federal order-in-council stipulates that Quebec maple syrup producers must go through the federation if they want to export their product.

"Something could be done, at the federal level, to modify this order-in-council," he said in an interview Monday.

The matter will be studied and expert legal opinion sought, he said.

Paul Rouillard, deputy director of the federation, said the ruling recognizes the existing system and confirms Quebec's jurisdiction in this area.

"Not only the provincial laws but the federal laws as well are being respected," he said.

He describes Ms. Grenier and the Comité de défense des acériculteurs du Québec – on whose behalf Ms. Grenier is fighting the legal challenge – as part of a minority of people in any society who "are always dissatisfied."

"Regulating the sector is one thing, but taking control is another," said Benoît Girouard, president of L'Union Paysanne, a farmers' group opposed to the marketing board. 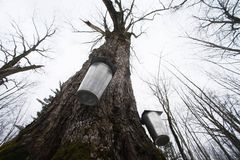 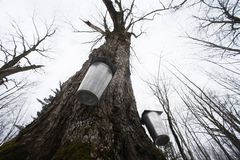 How maple syrup producers tap banned performance enhancers to milk more money from the trees
May 12, 2018 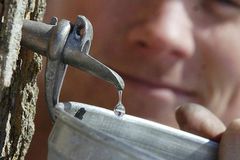