What followed was arguably the worst humiliation in Canadian business history. Mr. Reichmann's bankers walked away from a global bailout of what was then the world's largest real estate company. Olympia & York Developments was carved up by creditors. Much of his fortune was vaporized. Worst of all, his vision of a vibrant new money centre in London's Docklands was ridiculed as a grand testament to real estate folly.

Last week, Mr. Reichmann saw Canary Wharf slip from his grasp again when a German bank repossessed his 8.45-per-cent stake in the sprawling development, according to sources who confirmed British media reports. Mr. Reichmann could not be reached for comment and a spokesman for Canary Wharf declined to comment.

No one likes to lose something twice, but this time around, the humiliation is not nearly as painful. According to people familiar with the reclusive 78-year-old, Mr. Reichmann still has control of most of the small fortune he slowly rebuilt after Olympia & York was pushed into bankruptcy.

Unlike his first plunge into Canary Wharf, Mr. Reichmann did not mortgage most of his business to reclaim a slice of the development when he purchased a stake in 1995 with the help of a few billionaire friends, including George Soros and Prince al-Waleed bin Talal.

He owns interests in office developments in Mexico and non-real-estate investments in Canada and elsewhere. Most of all, he still has bragging rights to the contrarian vision that correctly foresaw, years ahead of its time, that Canary Wharf would one day house Europe's largest collection of global banks and financial institutions. "You can never take that vindication away from him. He was right about Canary Wharf. That will always be his," said one person close to Mr. Reichmann.

Added veteran Bay Street money manager Ira Gluskin: "I still rate him somewhere near the top of the list of the smartest people that I have encountered over the decades."

So what went wrong this time?

"Well, real estate does have its booms and busts," the source said.

The globe-trotting financial players that filled up Canary Wharf during the past decade have been fleeing like scared rabbits ever since the global financial crisis toppled some and pushed others into shotgun marriages. Lehman Brothers, which had 20 floors of office space, is bankrupt. Bank of America and Morgan Stanley are downsizing their Canary Wharf operations.

The development's operating company, Canary Wharf Group, was forced to publicly admit earlier this year that it was at risk of breaching its financial covenants.

Covenants are those tricky legal clauses that give lenders the power to seize assets or demand loan repayments if certain stress thresholds, such as shrinking cash flow or rising vacancy rates, are tripped. It was a covenant breach that appears to have triggered the loss of Mr. Reichmann's shareholding at Canary Wharf.

According to a report in London's Daily Telegraph newspaper, which was confirmed by a source, Mr. Reichmann had pledged his Canary Wharf holdings as collateral for a bank loan and last week Germany's Commerzbank sold the shares for £112.5-million ($196.8-million).

It is understood that Mr. Reichmann was not surprised by the bank's move and that it followed several weeks of discussions about declining values at Canary Wharf.

Fortune will likely shine again on the office towers that rise above London's Thames River. But it's unlikely that Mr. Reichmann will make that bet for a third time.

People close to the businessman said he has slowed his pace considerably since he broke his hip over two years ago after a fall in Toronto. He uses a cane to walk, travelling is scaled back and real estate plays a much smaller role in his life.

"Things are much quieter for him now," the source said. 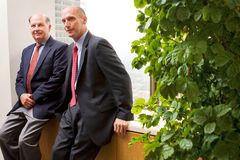