Nobina Robinson is chief executive officer of Polytechnics Canada, a national alliance of colleges and polytechnics.

Over the past few years, gloom-and-doom news reports and commentaries have warned about the dangers of pursuing any sort of higher education other than earning a university degree, in terms of ultimate earning potential. The general argument is usually that a university degree leads to a high-paying, successful career and that other forms of postsecondary education or trades training don't pay off. Those ideas, however, rest on a shaky foundation that crumbles under the slightest scrutiny.

First off, the university-degree promoters wrongly equate the career-earning power of baby boomers who graduated from university with those recent university grads, mistakenly applying conclusions from the past to the present.

Advocates of this faulty logic argue that the earning power of a university grad increases significantly over the course of one's life, leading to 50-per-cent-higher incomes near retirement than that of non-university graduates. And there's the rub. Proponents calculate the income power of university grads who have logged four decades in the work force, saying this represents the lifetime earning power of today's university-degree holder. If only.

Baby boomers who are nearing retirement pursued their university education in the 1960s, when only one in a hundred Canadians had a university degree. But back then, even a high-school diploma was enough to start a career and achieve a comfortable, middle-class lifestyle. Today, there is no magic single ticket to high earnings.

Every year, more than 250,000 people graduate with a bachelor's degree in Canada, more than 30 per cent of them in arts programs. But those degrees don't come with a job guarantee. We have reached a point where there is arguably an oversupply of bachelor-degree holders and an undersupply of entry-level work.

The fact is that the path to jobs and higher lifetime earnings increasingly goes through the country's community colleges and polytechnics rather than universities exclusively. A rapidly growing number of college students, in fact, have a general university degree under their belts.

Five years ago, 7 per cent of students enrolled in Canadian colleges had a university degree. Today, that has nearly doubled, to 13 per cent. On average, more than one in 10 college students hold baccalaureate degrees; at some specific polytechnics, the figure approaches nearly half of their full-time students. When these individuals get a job, thanks to their hands-on college education, the universities they attended eagerly include them among their graduates. But the college grads are not hired because of their university education, at least not on its own. And it is totally misleading for universities to point to the earnings of these college grads as an economic justification for obtaining a university degree.

The seemingly entrenched denigration of any postsecondary pursuit that doesn't involve a university campus is particularly troubling in a country where all forms of postsecondary education are heavily subsidized by taxpayer dollars. Meanwhile, Canada's vocational education and training system stands out for its breadth and depth of credentials and programs. Of course, not all college programs lead to the same labour-market outcomes. A graduate in medical radiation technology will earn more than a certified fitness instructor; a Red Seal electrician will make more than a hairstylist. Comparing the aggregate of sub-degree programs to the aggregate of bachelor's, master's and doctoral degrees, and then counselling someone to pursue any bachelor's degree, is just plain silly.

As well, the earnings debate rarely takes into account the opportunity costs of different forms of postsecondary education and training. In the skilled trades, you are paid to be an apprentice. It takes years to graduate, but you do so with less financial pain along the way and you leave on a stronger footing than that year's university graduate. Similarly, the duration of lower-tuition community college or polytechnic programs is shorter than university, so students take on a lighter debt load.

Misleading claims by universities about the value of their degrees does everyone a disservice – students, parents, employers, policy makers and the general public. Sadly, Canada lacks reliable labour market information that would lead to informed education choices.

If high-school guidance counsellors and parents were armed with accurate information about how many people are currently studying what types of programs, about employers' job-vacancy forecasts and about the earnings of recent postsecondary grads, they would be able to really guide young Canadians toward programs that have solid employment prospects when they graduate. 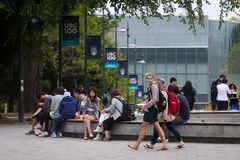