For some industry observers, the takeover of Whole Foods is not shocking. The company was the subject of rumours for months. But to see mammoth-sized Amazon, with its large revenues and small profits, make the biggest deal in its history, may be surprising for some. On the surface, this acquisition may look odd, but Amazon acquiring troubled Whole Foods is more than timely for both companies.

One thing though should be made clear: Amazon is positioning itself to be the most powerful retailer in the world, and it cannot achieve this goal without food.

Food retailing was once more of a distraction for Amazon: its online grocery business, AmazonFresh, is only available in a handful of cities. It is now becoming a key piece of Amazon's long-term focus; after all, food is a $700-billion sector in the United States, and almost $120-billion in Canada. It is too much for Amazon to ignore. Most importantly, selling food is another way for it to attract and retain customers, especially if tied to the Amazon Prime subscription service. Purchasing Whole Foods is a quick way to build a high-margin business in the food-retail industry.

Margaret Wente: How I became an Amazon junkie

Amazon is known for its low, affordable prices and quick, efficient execution. In contrast, Whole Foods is intimidating to customers seeking affordable prices: it has a strong brand, but also high prices. Amazon's logistics and extensive adoption of automation and technology can make Whole Foods more economically accessible. More selection, lower prices and delivery accuracy will be the pillars on which to build a successful acquisition. With these, plus the Whole Foods brand, prime locations and established supply chains of high-quality organic products, Amazon can make Whole Foods work again. Since capacity and reliability are always challenges in organic procurement, Amazon is starting from a strong position.

Amazon is also known for being disruptive by nature, across varied markets. It provides the world's largest cloud infrastructure, its television shows have won a number of Emmys, it is a global leader in tablet sales (ranking fifth behind industry leaders Apple and Samsung), its work in artificial intelligence is competitive with Google and IBM, and it operates the world's most-watched live video streaming service (Twitch). Amazon is a technology company as much as it's a retailer, and its capacity to drive digital transformation has led to dominance in e-commerce.

This capacity is evident in its concept for how brick-and-mortar retail stores should work, called Amazon Go. The prototype version, now open in Seattle, allows consumers to walk in a store, pick food products, and leave. Behind-the-scenes, Amazon uses in-store sensors, smartphones, data science, and its deep understanding of consumers to track purchases and charge your credit card.

For a growing number of consumers, waiting in line to give a retailer money no longer works in the 21st century. While most grocers try to figure out what to do with the immense amount of data available to them, Amazon generates even more data and uses them to adapt to a shifting clientele.

Essentially, Amazon, Walmart and Costco are doing to the grocery sector what Apple did to the music business almost 20 years ago. The music industry resisted change, even as consumers figured out how to download music for free, illegally. That's when Apple came in with revolutionary iPods and the iTunes Music Store for convenient, legal access to music. Few believed people would be willing to pay a dollar a song, but it happened. Today, more songs are sold each year than ever, but the music industry must share that revenue. Apple came in with its own rules, dictating a new regime to an old guard in a completely different sector and has reaped the rewards.

The same fate awaits food retailing if it doesn't embrace the future.

Amazon killed the bookstore, and its next prey could be the food store. Only time will tell. But given its ability to fuse efficient distribution and strong strategic market insight, it is quite foreseeable that Amazon could become the No. 1 food retailer in Canada and in North America.

The threat from Amazon is real and things will change quickly. For all intents and purposes, Amazon still considers Canada as a pilot project, but that may change quickly. Undoubtedly, Amazon is serving notice to Canada's food-distribution establishment. Canadian food companies are still trying to build their omnichannel, harmonizing the bricks-and-mortar approach with their virtual, online space. Most are barely in the online game (the average rating of Canadian grocers' iPhone apps is two out of five). The fact that food sales are not the core of Amazon's business is likely keeping Loblaw, Sobeys and Metro up at night.

Amazon's size and reach gives it the ability to beat most competitors on price.

And since millennials have a long-standing relationship with online shopping, such a competitive advantage is key. With a portfolio of new fashionable private labels such as Happy Belly, Wickedly Prime, Presto! and Mama Bear, millennials are clearly on Amazon's mind.

Whole Foods is now owned by a company that did not exist 25 years ago, and which prioritizes growth and evolution over profit. This is a whole new world. With a $13.7-billion (U.S.) takeover, Amazon is clearly making a statement. 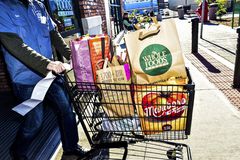