C.J. Polychroniou is a political economist/political scientist who has taught and worked in universities and research centres in Europe and the United States.

As the dust settles over the negotiations for the approval of a new three-year Greek bailout package, criticism of Germany seems to be growing louder throughout Europe. This is because it has become apparent to many that in the age of the euro crisis, German power is being used to forge new rules and impose policies that reflect Germany's hegemonic role in the European Union rather than the interests of the union as a whole. Not to mention that Germany's leaders are acting like bullies.

Make no mistake about it: German Chancellor Angela Merkel and Finance Minister Wolfgang Schaeuble blackmailed Greece into accepting a humiliating agreement or face crashing out of the euro zone. They demanded complete capitulation from Greek Prime Minister Alexis Tsipras, who was subjected to 17 hours of psychological "waterboarding" in the closed-door meetings, as one European Union official put it.

The aim was to punish an entire country for having the audacity to stand up to five long years of austerity – it has decimated Greece's output, created massive unemployment levels and caused a humanitarian crisis in the midst of one of the world's richest regions – by voting into power a leftist government and then giving a resounding No to an austerity referendum, however ill-conceived and ill-timed it was.

By taking this callous stance, Germany's current leaders have shown that they share none of the visionary power possessed by past German leaders – from Konrad Adenauer and Willy Brandt to Helmut Schmidt and Helmut Kohl – and appear to have forgotten Germany's own history with unbearable debt levels and the disastrous effects imposed by the infamous Treaty of Versailles. As such, they risk tarnishing their reputations as responsible European leaders by turning the union into a "new Rome."

Treating Greece as a debt colony is utterly abhorrent. Greece's debt is unsustainable, as a recent International Monetary Fund report has clearly shown, and European Central Bank president Mario Draghi reiterated the point just a few days ago. The culprit is none other than the austerity-driven policies guiding the bailout plans, which have increased rather than decreased Greece's debt burden.

Between 2010 and 2015, the Greek debt-to-GDP ratio rose to 177 per cent from 128 per cent, even as the country undertook the most radical adjustment program ever attempted by a postwar Western society. Yet, to this day, and in spite of persistent calls by world leading economists, Germany shivers at the thought of a Greek debt writeoff, preferring apparently to have Greece in a legal state of permanent debt peonage.

And while there has been much talk in the media, especially in Germany, about Greek profligacy and irresponsibleness, let us not forget that it was irresponsible German banks that were lending billions to Greece prior to the outbreak of the debt crisis, and that German behemoths such as Siemens made a science out of the practice of corruption by bribing Greek officials in order to secure highly lucrative contracts.

As for the bailout packages, it is a widely acknowledged fact that they were designed not in order to provide a firewall against the collapse of the Greek economy, but to rescue German and French banks. Most of the bailout money went to foreign banks that had lent to Greece.

The third bailout agreement that the government of Alexis Tsipras was forced to accept in order to avoid "Grexit" includes a new set of recessionary economic measures, additional anti-social policies that will shrink further the Greek standard of living, and demands for the complete surrender of the nation's fiscal authority to Berlin and Brussels. All in all, the measures demanded in the new agreement – cuts in excess of €13-billion ($18.3-billion) and new tax increases, additional pension cutbacks, further labour market reforms and the stripping of whatever state assets still remain – will solidify Greece's abrupt decline into a poor, underdeveloped country.

Amazingly enough, EU leaders remain adamant in their belief that austerity leads to prosperity. But for whom? If the austerity measures and the structural reforms imposed in Greece were to be introduced in Germany, the well-being of German people would be adversely affected overnight.

But it is not only Greece that has become a neoliberal laboratory for the ambitions of Europe's new hegemon. The entire periphery of the euro zone is being subjected to shock therapy policies. The catch, of course, is that there is only shock and no therapy, with the result being that the periphery drowns in debt while German competitiveness is provided with an extra boost by the undermining of the peripheral economies so the German economy can run even higher surpluses.

With imbalances completely out of sync, the European monetary union is beginning to exhibit traits of a regional system divided into core (rich) and peripheral (poor) societies. This is an unsustainable process that will lead, in one way or another, to the fall of the "new Rome."

Perhaps this is what Germany's leaders were afraid of more than anything else from the leftist Tsipras government – a challenge to Europe's new hegemon and a demand for Greece's own place in the sun. 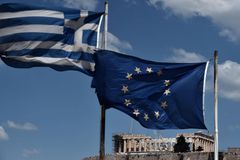