Glen Hodgson is senior fellow at the Conference Board of Canada

A decade ago, Canada was being touted by political leaders and media commentators as an "energy superpower." Does that description still fit today – and will it be appropriate tomorrow?

It goes without saying that energy is a key part of the Canadian economy. It represents about 10 per cent of GDP and one-fifth of exports. Canadian oil production has grown by around 50 per cent in volume terms over the past decade – driven by oil sands investment and production – although natural-gas production has softened. Canadian exports of oil, natural gas and low-carbon electricity are very much in demand in the U.S. market.

But the energy game is changing. Four factors are going to challenge Canada's future status as an energy power.

Factor 1: Ample new sources of oil and natural gas supply. Arguably the most striking story of new energy supply is happening not in the traditional Organization of Petroleum Exporting Countries countries, but right next door in the United States. U.S. production of both oil and natural gas has grown significantly over the past decade. Sophisticated technology – specifically the combination of fracking and horizontal drilling – has allowed oil and gas trapped in porous rock to be extracted economically. While Canada has grown its share of U.S. oil consumption at the expense of OPEC producers, U.S. domestic natural-gas production has slowly crowded out Canadian gas exports. And whenever prices creep upward a bit, the U.S. energy industry appears able to respond quickly with new and efficient investment, and increased production.

Factor 2: Structurally weaker prices for oil and gas. Oil prices have recovered after collapsing two years ago, but appear to be constrained at around $50 a barrel – half of what they were in mid-2014. Natural-gas prices are largely determined regionally; prices in North America have been moderated by the structural changes in U.S. gas production. Oil and gas prices may improve a bit into 2018. But earnings for many Canadian energy producers have already been hit hard, cushioned partially by a floating loonie.

Factor 3: Inadequate access to global markets. Thanks to emerging markets, global demand for oil and gas is robust and still rising – but Canadian suppliers are unable to take advantage. They have little pipeline access to global energy markets, and possible new pipeline projects have to run the gauntlet of regulatory approval with many conditions set, and local politics. The inability to access global markets has hurt sales prices for Canadian oil and gas producers for decades, with significant North American price discounts. Shipping by rail is an alternative, but it is more expensive and more dangerous.

Factor 4: The transition to a low-carbon economy. The low-carbon transition now under way represents a fundamental, long-term structural change in how the world will consume and produce energy in the decades ahead. The U.S. withdrawal from the Paris climate accord may slow the adjustment a bit, but other actors such as the European Union and China are not likely to change course.

Although there is no single pathway to a lower-carbon economy, there are many signs of changes to come. Global targets have been set for reductions in greenhouse gas emissions. Carbon pricing is in effect, both in Canada and elsewhere. Countries and auto producers have announced their intention to shift toward low-emission vehicles, although they still represent a very small share of the global market. Electricity producers are eliminating coal and shifting to natural gas as an input, as well as developing renewables and reconsidering nuclear as a low-carbon power source.

What can the Canadian energy sector do to adapt to this coming reality? Energy producers can start by setting an ambitious goal – to become the most-efficient low-carbon source of oil and gas production, certainly in North America. The sector could continue to build and sell expertise across the entire energy value chain. Beyond production and extraction, there is money to be made in energy construction and a wide range of specialized energy services, from research to finance. A full array of lower-carbon energy management alternatives can continue to be developed, including carbon capture and storage, nuclear energy and innovative energy-storage options. Public policy should be designed to support all three elements of a low-carbon energy strategy.

Canada could become a "clean-energy superpower" if the low-carbon transition is embraced and acted upon. But if we can't adapt, Canada's energy industry will be hard-pressed to maintain its stature in the decades ahead. 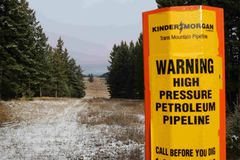 Opinion
Canada’s oil can fill U.S. gap, but at what cost?
Subscriber content
August 1, 2017
Opinion
A clean-energy future comes with significant costs for Canadians
July 7, 2017
Follow us on Twitter @globeandmail Opens in a new window
Report an error Editorial code of conduct
Due to technical reasons, we have temporarily removed commenting from our articles. We hope to have this fixed soon. Thank you for your patience. If you are looking to give feedback on our new site, please send it along to feedback@globeandmail.com. If you want to write a letter to the editor, please forward to letters@globeandmail.com.
Comments