Keith Martell is CEO of the First Nations Bank of Canada. Adam Spence is founder and CEO of SVX.

Of all the challenges facing Canada's First Nations, lack of access to banking services never makes the news. But Canada's Indigenous communities are among those most underserved by Canada's financial-services sector – and it's a bolt that helps keep the poverty trap shut tightly.

In many remote places, the nearest branch can be hundreds of kilometres away, so there's no easy way to open an account or cash a cheque.

If Canada's current efforts at reconciliation with its First Nations are to bear fruit over the long term, creating a financial system that works for Indigenous populations must be a priority. One solution that could help: Tapping the potential of Canada's $9.2-billion "impact investing" market.

Impact investments are new instruments that allow investors to put their money into organizations that are both socially and financially valuable. Just as individuals can now make ethical choices about the food they eat and the energy they use to power their homes and cars, they are increasingly able to invest for purposes that have a social impact as well.

For more than 20 years, First Nations Bank of Canada (FNBC) has been financing Indigenous businesses and providing full banking services in some of the most remote places in the country. Recently, it signed on with SVX, a Toronto-based investment platform created by MaRS Discovery District to provide an online access point for investors to connect with companies that have a social impact, such as FNBC. When SVX was created four years ago it was accessible only to accredited investors, but it relaunched this fall with investment opportunities for the general public as well.

FNBC is looking to raise up to $2-million on SVX, along with additional capital from aboriginal investors, to build new branches and expand its loan portfolio – already valued at over $330-million. It wants investors who are interested in the SRI (social return on investment), not just the ROI.

Founded with investment from the TD Bank and Saskatchewan First Nations, FNBC is now 81-per-cent Indigenous-owned and has 12,700 customer accounts. By focusing on underserved communities and working closely with clients, it has remained profitable and paid modest dividends while suffering no significant losses on its commercial loans. The bank now has eight full-service branches and five smaller community banking centres in eight provinces and territories. For the remote communities it serves, these branches are as vital as the local school or hospital.

The first offering from FNBC on SVX is open only to accredited investors, such as charitable foundations, financial institutions and wealthy individuals. If the offering succeeds as well as expected, FNBC may consider opening it to the general public.

The offering is about more than simply raising capital to support the bank's business. It will open up a new avenue for impact investors to support Canada's First Nations creatively and profitably.

Obscured behind the headlines about inadequate housing, lack of clean drinking water and the suicide crisis in some communities, is the emerging face of First Nations. It is young, fast-growing, entrepreneurial and keen to use economic development to break the cycle of poverty. The offering will help build assets for a population with tremendous potential by investing in a well-established financial institution. And, just as important, aboriginal investors who have supported the bank since its inception will receive an overdue endorsement of their business strategy.

In their separate spheres, the SVX and FNBC have been working to unleash and grow valuable social assets that conventional capital markets have overlooked. It is a natural partnership. But the scale of the issues are vast and more bold initiatives like this – that are driven by First Nations communities and supported by the Canadian public – are needed to create a sustainable future.

The opportunity is more than financial. It is a chance for all Canadians to join the path to reconciliation – not with apologies, but with a tangible commitment to Indigenous prosperity. 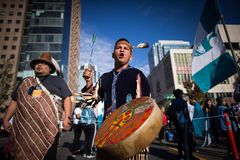 Opinion
Here’s one way to improve Indigenous living standards: Break down the digital divide
May 29, 2017
Opinion
The time for indigenous-corporate partnerships is now
April 14, 2017
Follow us on Twitter @globeandmail Opens in a new window
Report an error