Sean Speer is a Munk senior fellow at the Macdonald-Laurier Institute.

That Prime Minister Justin Trudeau's recent "listening tour" has occurred against the backdrop of Donald Trump's U.S. presidential inauguration and first two weeks in office is hardly a coincidence. It's a sign that the Prime Minister and his advisers are rightly sensitive about staying connected to working-class voters. But while such a tour is a first step, it's hardly a substitute for a practical, constructive agenda to support jobs and opportunity for all Canadians.

It's widely accepted that Mr. Trump's election was driven in large part by growing economic anxieties and a sense that the political system was unresponsive to the concerns of working-class voters. The President's message of economic populism resonated in key swing states such as Michigan, Wisconsin, Ohio and Pennsylvania and surprised virtually all the pundits and commentators.

Much of the subsequent analysis of the U.S. election has focused on stagnant median incomes as evidence of the economic dislocation that underpinned Mr. Trump's political fecundity. The presumption is that Canada is infertile political ground for similar populism because of our better record on middle-class income growth and social mobility.

While it's true that Canada has outperformed the United States in these two key areas, it's no time for complacency. There are other economic indicators that could point to the nascent conditions for a Trump-like populism – namely, Canada's essentially flat-lined labour-force participation rate.

Labour-force participation refers to the share of working people who are employed or actively looking for work. That it discounts those who have given up searching for work may provide a useful indicator for discerning economic anxiety and political frustration. It may be the canary in the coal mine, so to speak.

It's notable, for instance, that Mr. Trump's election coincides with the U.S. labour-force participation rate hitting its lowest level in more than 30 years. And the state-by-state figures provide even more insight into Mr. Trump's political resonance.

Nine out of 10 states with the lowest labour-force participation rates voted for him. Of the five states that flipped to the Republican Party in 2016, three – Florida, Michigan and Ohio – experienced a drop in their participation rate relative to 2012, and the other two were essentially flat.

The point is, to the extent the labour-force participation rate reflects discouragement on the part of dislocated workers, it may provide a marker for a more populist politics.

How does Canada fare? Our labour-force participation rate exceeds that of the United States, but it still ought to be a cause for concern for the Prime Minister and his government.

Canada's labour-force participation rate has been essentially flat for more than a decade, and has fallen consistently since 2008. The picture is even worse for under-represented groups such as youth, First Nations, new Canadians and people with disabilities.

While lower labour-force participation rates are partly a function of aging demographics, it would be wrong to conclude that it shouldn't concern policy makers or that there's nothing they can do. Especially since the participation rate has even stagnated for those in their prime working years between ages 25 to 54.

So, what steps can the government take to support jobs and opportunity?

The first is to recognize that stronger economic growth is an essential condition for boosting labour-force participation. This means a pro-growth agenda that enables investment and job creation across the country. The basic building blocks of such an agenda are straightforward, including low, competitive taxation, sound public finances, limited and predictable regulations (including for major energy projects), a pro-competition legal framework and key public investments in human capital and basic infrastructure.

The second is a series of targeted policies to support employment in general and to help under-represented groups overcome different barriers in particular. This policy agenda is invariably more complex and will doubtless require some trial and error. But examples include: education and career training reforms, more flexible labour-market rules (including for working mothers), an expansion of the Working Income Tax Benefit, wage subsidies and work-sharing for people with disabilities, and an ambitious set of policies to support entrepreneurship (such as lowering capital-gains tax and intellectual-property reform).

Canada's economic performance has been relatively positive and its benefits broadly distributed in recent years. But it would be a mistake to fall victim to complacency. The Prime Minister's listening tour must be followed with constructive action to boost jobs and opportunity. Otherwise, Canadians may ultimately conclude that he wasn't actually listening.

Only half of disabled Canadians are employed, poll finds
January 17, 2017
Opinion
Canada should strengthen the safety net for precarious jobs
December 27, 2016 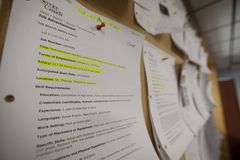 Wage, job quality declining for young workers, Statscan says
December 5, 2016
Follow us on Twitter @globebusiness Opens in a new window
Report an error
Due to technical reasons, we have temporarily removed commenting from our articles. We hope to have this fixed soon. Thank you for your patience. If you are looking to give feedback on our new site, please send it along to feedback@globeandmail.com. If you want to write a letter to the editor, please forward to letters@globeandmail.com.
Comments