John Manley is President and CEO of the Business Council of Canada.

The delayed signing of CETA, Canada's trade agreement with the European Union, should be seen as a triumph of bipartisanship in a world full of small-minded political sniping and nastiness.

History will judge the Comprehensive Economic and Trade Agreement as an important legacy of Stephen Harper's term as prime minister. But it is also a landmark achievement of Prime Minister Justin Trudeau and his fearless Trade Minister, Chrystia Freeland.

The negotiations leading to Sunday's signing in Brussels began in the early aftermath of the global financial crisis in 2009. Mr. Harper's government was a consistent promoter of liberalized trade. Three agreements stand out: Korea, in effect since 2015; CETA, now expected to go into force on January 1, 2017; and the Trans-Pacific Partnership, completed in 2015 but not yet ratified (and now in doubt as a result of anti-trade sentiment in the United States).

Of these, CETA is the most important for Canada because it provides our country with privileged access to the European Union's massive economy, the second largest in the world behind the United States.

Mr. Harper's accomplishments included persuading the Europeans to enter the negotiations in the first place, something they had resisted since prime minister Jean Chrétien proposed such an agreement in 1994. Mr. Harper also made sure the provinces were at the negotiating table from day one, and kept them there through seven long years of talks until a deal was reached and the agreement went into a prolonged process of legal scrubbing and translation.

Much heralded in Canada, CETA was barely noticed on the other side of the Atlantic until Europe entered similar negotiations with the Obama administration on the proposed Transatlantic Trade and Investment Partnership (TTIP). That aroused the opposition of NGOs and others in civil society, and in little time TTIP became conflated with CETA. Opponents called CETA a "stalking horse" for TTIP and supporters called it an essential first step on the road to TTIP. They were both wrong.

The Harper government took the rational view that the EU had negotiated in good faith and could be relied upon to look after the formal process of European approval and ratification, while it did likewise at home. There were bumps here and there, as Newfoundland and Labrador threatened to withdraw support prior to the past provincial election and a new and unknown premier took office in Nova Scotia. But the job was largely done when the Trudeau Liberals were elected in October, 2015.

But in Europe, the road to this point proved far more convoluted. An embattled German chancellor, weakened by the Syrian refugee crisis, needed the support of the left-wing Social Democratic Party (SPD) in her ruling coalition to pass CETA. Opposition grew in Austria as a court challenge unfolded in Germany. Bulgarians and Romanians held out for changes to Canadian visa requirements. Even more serious was the problem lurking in the Belgian federation, where the Walloons had lost an election and were out of sympathy with an agreement whose negotiating mandate had been formulated while they were in government.

That CETA was signed this week (it still must pass the European Parliament) is a triumph of Mr. Trudeau's diplomacy and his Trade Minister's skill, courage and smarts. Ms. Freeland went into the lion's den at a meeting of Germany's SPD, a party unfavourable to the agreement, and delivered what by all accounts was a masterful performance. Emphasizing her government's record on refugees and climate-change policy, and stressing Canada's shared values with Europe, she was interrupted multiple times by applause.

A member of the European Parliament told me that Ms. Freeland had singlehandedly changed the mood of his party and the outcome of their deliberations. A minister who was present described a similar performance by Ms. Freeland at a meeting of European trade ministers. While she was not immediately successful at persuading the Walloons, that situation finally resolved itself last Friday. Mr. Trudeau's efforts behind the scenes, as well as his willingness to be pragmatic about what Canada's main interests were in this agreement, were essential to its adoption.

CETA is Stephen Harper's legacy, no less so because it was the Trudeau government that got it over the finish line. It was Mr. Harper's vision and the skill of his government that brought home an agreement in the first place. But it is equally a major achievement of the Trudeau government. Without the Prime Minister's personal diplomacy and polishing of Brand Canada, as well as Ms. Freeland's extraordinary efforts, I believe CETA would have failed.

Canadians are well-served when its political leaders put Canada first and party second. 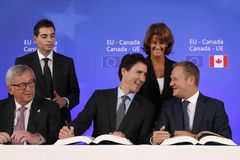 Thanks to Marmite and CETA, Brexiters’ enthusiasm is waning
Subscriber content
October 28, 2016
Opinion
As women, Freeland and Clinton forced to walk a fine emotional line
October 28, 2016
Follow us on Twitter @globebusiness Opens in a new window
Report an error
Due to technical reasons, we have temporarily removed commenting from our articles. We hope to have this fixed soon. Thank you for your patience. If you are looking to give feedback on our new site, please send it along to feedback@globeandmail.com. If you want to write a letter to the editor, please forward to letters@globeandmail.com.
Comments