The Brexit decision is proving to have serious global economic consequences, but Britain's intention to leave the European Union provides some real opportunities for Canada.

Amid the doom and gloom, some silver linings are emerging in the vote's wake. Experts such as Jaime Watt, executive chairman of public-affairs firm Navigator, have recently said that the Brexit vote and coming U.S. election make Canada look like a safe, stable place to be.

How can Canada position itself for success in this new global reality? Fortunately, we are starting from a position of strength.

We have a long-standing political and economic relationship with Britain that benefits both countries. Britain is Canada's second-largest inbound and outbound investment partner and our third-largest trading partner.

Our pension funds are some of the biggest institutional investors in Britain, while our banks have created long and successful business relationships and jobs on both sides of the pond. An estimated 100,000 Britons work for Canadian firms there, and an equal number of Canadians work for British firms here.

As British Consul-General and U.K. Trade & Investment head Kevin McGurgan phrased it in his first post-Brexit remarks: "I have no doubt that through this time, the U.K.'s relationship with Canada will go from strength to strength."

Mr. McGurgan spoke at a recent panel discussion hosted by the Toronto Region Board of Trade and the Toronto Financial Services Alliance. The relationship will remain important, he noted, as we already collaborate "on today's advanced manufacturing, from Magna with Jaguar Land Rover, to Magellan Aerospace on the F-35 program, to the growth sectors of the future: financial technology, Smart Cities and creativity."

When the Toronto Region Board of Trade held its Smart Cities summit, it looked to business and government experts from London. In arts and entertainment, Britain and Canada had 15 co-productions in 2015, second only to France, thanks in large part to Toronto's Pinewood Studios.

Canada can and must leverage the strengths of Toronto's globally renowned financial-services cluster to grow such trade linkages. As top 10 global financial centres, Toronto and London will remain at the heart of the two countries' business relationship.

Canada must also highlight the strength and stability of its financial-services industry to attract global business. Nicholas Thadaney, head of Global Equity Capital Markets at TMX Group, who also spoke at the panel discussion, said now is the time for Canada to reinforce the message that our financial-services stability is regularly ranked first or second in the world and that our pension plans remain some of the best sources of capital globally.

While London will almost certainly remain one of the world's most important financial centres, the Brexit vote may open the door to foreign firms to list on exchanges in Canada.

Mr. Thadaney said Canada needs to continue pursuing strategies to expand its global presence beyond the resource sector. Central to accomplishing this goal is the ratification of free-trade agreements. As Mr. Watt noted, we are a nation of traders.

It's encouraging, then, that despite Britain's vote to leave the European Union, Canadian Trade Minister Chrystia Freeland has received assurances that Britain will continue to support Canada's desire to ratify the Comprehensive Economic and Trade Agreement with the European Union. Mr. McGurgan echoed that statement.

Looking ahead, the possibility of a Canada-Britain trade agreement, which could be far easier and faster to complete than a deal with the 28-member EU, should be a priority for Ottawa.

The Trans-Pacific Partnership will also be important as Canada looks to expand into new markets. It's time for us to step out of the North American bubble.

Recently, the leaders of Canada's largest chambers of commerce and boards of trade met in Toronto to learn about ways to help more small and medium-sized businesses take advantage of global opportunities.

But there are still risks. While our Brexit panelists were primarily focused on the possibilities this uncertainty has opened for Canada, they also cautioned that the anti-globalization forces that have brought on Brexit and the current U.S. instability could affect Canada as well.

CIBC economist Andrew Grantham, who also spoke at the panel, argued the threat of a reversal of globalization around the world would pose significant risk to the Canadian economy. To be successful, Canada can play a constructive role in helping Britain and the EU through what will undoubtedly be a difficult transition.

Ultimately, this is Canada's time. Let's keep calm and trade on.

Lexpert: Brexit could have a pronounced impact on Canadian M&A Subscriber content
May 16, 2018 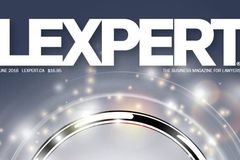