Are we really surprised by the tumble that stocks in European banks have taken since the beginning of the year? (They have lost approximately a quarter of their value.) We didn't need a particularly powerful crystal ball to see that banks were the weakest part of the European economy.

In the aftermath of the collapse of Lehman Brothers, which sent shock waves through the banking sectors of many countries, Europe did not go through a thorough cleanup to separate the good banks from the bad, unlike the United States. Europe, with its single currency, didn't have a banking union at the time (it was established in 2014), so lack of co-ordination and domestic fears of triggering an even worse crisis pushed Europe's banks to sweep their structural problems under the carpet.

That was then. But these problems are still alive and kicking. The transmission mechanism that "pumps" liquidity into the system and channels money into productive activities has been broken for some time. This explains why all the European Central Bank's attempts to revamp credit growth have achieved so little. Instead, the banks used cash made available through the long-term financing operation in 2011 to restructure their debt.

The ECB ran a stress test in 2014 and concluded that, over all, the health of European banks was good, although several Italian banks were singled out as problematic. The assessment took into account banks large enough to have systemic effects, but did not include local and regional lenders. In countries where the economy is dominated by small and medium-sized companies, these banks are directly affected by how these companies perform. And many of them found themselves in dire straits as a result of the deep recession that followed the global financial crisis of 2008. (How bad is the stock of non-performing loans that haunts European banks? That's anybody's guess, but it's it's likely in the region of €1-trillion, or $1.5-trillion.)

Now enter the European Union bail-in mechanism for a failing bank, which came into force at the beginning of this year as part of the EU's Bank Recovery and Resolution Directive. The idea is that the costs of a failing bank should be absorbed by its bondholders (i.e. the bank's creditors), shareholders and depositors with more than €100,000 before asking the taxpayers to chip in, as they did in 2008-09.

In practice, however, this new directive has created panic among bank investors – especially in Italy, where the bail-in mechanism was applied to four regional banks at the end of last year with some serious consequences for retail investors. (Because of their attractive yields, bank bonds are favourites of Italian retail investors.) Are there other banks at risk of being bailed-in? Nervous investors have suddenly begun shying away from banks. Deutsche Bank, UniCredit and Credit Suisse have seen their shares drop to pre-crisis values.

Making things worse, protracted low oil prices and their intertwining with increasing geopolitical tensions have amplified anxiety. Here, too, banks are on the brink, as they are on the receiving end of some of the turmoil brewing around oil. Think of how low prices are posing challenges to the oil companies' business models. Many will question whether prices will rebound to levels that allow significant profits. This will force some of them to write off high-cost projects, such as Brazilian deep water. Who will be hit by these writeoffs?

The scenario that the United States may fall into recession, Europe may be in the grip of deflation and China is in a mess stirs up more anxiety. The icing on the cake, however, is the possibility of negative interest rates. Will banks be forced to impose negative rates on their depositors and current account holders? Or will they lend more? In either case, how will shareholders respond? All seem to conjure up a perfect storm and make European banks particularly toxic.

It is difficult to make a prediction of how this will end. But one thing is sure: The "new normal" of low prices and negative interest rates will force many companies, banks included, to rethink their business models. Of course, banks are not companies like the others: They carry risks for both the real economy and the financial sector. And almost 10 years after the global financial crisis, banks continue to be too big too fail.

What's shifted is the notion that taxpayers should pay for the bailout. But the politics and economics of the new bail-in mechanism remain to be tested. 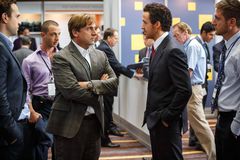