It looks like the long slide in the global price of food may be over. Farmers who supply commodity markets, such as vegetable oils, sugar and dairy products, will be pleased to see that values are beginning to climb after years of price attrition.

The global food price index published by the UN's Food and Agricultural Organization has been rising since the beginning of 2016 after three years of steady decline. However, there may be a sting in the tail for the farming community: Agribusiness suppliers also reckon that the tide has turned. Seizing the opportunity, the chemical giants that supply the world with seeds, fertilizer and pesticides are engaged in a corporate tussle for market power. If it continues unchecked, it's not just farmers but the world's consumers who will pay the price.

Bayer seems to reckon there is gold buried in the soil. The German company is best known for making headache remedies (Aspirin and Alka-Seltzer) but it also makes agro-chemicals (pesticides and herbicides) and it will be transformed into an agribusiness giant if its $65-billion (U.S.) offer (including debt) for Monsanto is successful. Bayer wants Monsanto's expertise in breeding genetically modified (GM) foods because it believes the world needs and wants this technology and the German chemists are probably right.

The anti-GM lobby is beginning to lose its grip on politicians, not just in Brussels where the Eurocrats are losing patience with French intransigence, but opposition in new markets, such as India, is fading. The big promise is plants that are less damaged by drought; the recent dry period is estimated to have cost India $100-billion in lost crops, loss of rural earnings and higher food imports. Only a few decades ago, plant breeding was a niche business with hundreds of players, but today six firms, DuPont, Dow, Syngenta, Bayer, BASF and Monsanto, account for two-thirds of the market for seeds. Dow and DuPont are now merging their plant-breeding activities and ChemChina is pursuing Swiss firm Syngenta with a $44-billion bid.

If plant breeding is becoming a biotechnology activity, it should be no surprise that it attracts and requires huge capital investment. Nonetheless, the question is what Bayer brings to Monsanto and whether mergers between agribusiness firms deliver anything more than pricing power. Bayer is touting more than a billion dollars in cost savings but you don't buy a company that prides itself on technological innovation just to save a few dollars in the payroll department. If Monsanto has any future, it is in its next great GM crop – a drought-resistant oilseed, for example. What does Bayer contribute to such an outcome?

Bayer's more likely agenda is the same as the logic in the tie-up between Potash Corp. and Agrium Inc., which will create a monster supplier of fertilizer, controlling almost two-thirds of the North American market. Bayer wants scale in this business because it provides security and pricing power in a market that is subject to huge swings in demand. Agro-chemical companies have to make big investments in infrastructure (such as Potash Corp.) or the new biotechnology that many hope will finally put an end to food shortages and hunger. If you can minimize pricing risk by controlling markets, you have a more secure money machine.

But it's not a winner for the rest of us because we need biodiversity, not just in plant and seed varieties but in the numbers of businesses that are breeding new plants. This is not an argument against GM but an argument against oligopoly. A concentration of capital among half a dozen seed companies is not a recipe for flourishing science and innovation. There is no evidence that capital concentration produces great innovation. Consider the pharmaceutical industry – the huge pharma combine has not solved the drug pipeline drought of the past decade. Consider also the oil and gas industry: It was not the integrated oil majors that led the shale gas and oil revolution but smaller and adventurous independent companies.

Plant breeding is too important a business to be allowed to be swallowed up in a merger frenzy. The consequences of an oligopoly in seeds and other farm inputs could be great and could last for decades before the damage is fully recognized. There is more than public interest at stake here; there is the interest of the Earth. 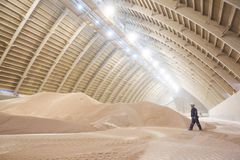