The world sometimes comes to those who watch and wait, and for Vladimir Putin, that could mean the delicious prospect of playing host to a queue of energy-hungry nations anxious to invest in Siberian oil and gas.

Less than a month ago Russia was a pariah state, targeted with U.S. and European sanctions. Fearing the loss of markets in Europe, Mr. Putin flew to China in search of a new business partner.

But, in the space of a week, the world's energy map has been turned topsy-turvy.

The helter-skelter descent of the Levant region into bloody chaos, means that forecasts of rapid growth in Iraqi oil output must now be shelved. If the world is not to experience a repeat of the oil price surge of 2008, an alternative source of additional supply must be found and the best prospect for the next five years is likely to be Russia.

The International Energy Agency has spelled out the problem in its Medium Term Oil Market Report 2014. "While OPEC remains a vital supplier to the market, it faces significant headwinds in expanding capacity," said Maria van der Hoeven, executive director of the agency.

As much as three-fifths of OPEC's incremental oil production capacity gain over the next five years is expected to come from Iraq. The IEA admitted Tuesday that its forecast of Iraqi production rising from current levels of about 3.2 million barrels a day (b/d) to 4.5 million b/d "faces considerable downside risk."

The oil fields south of Baghdad are still producing, but the multinationals which have invested billions in renewing the Iraqi oil industry since the 2003 U.S. invasion have withdrawn their foreign personnel. An interruption to the flow of foreign dollars and technology would not only be a huge blow to Iraq but a major setback to the global energy industry; the development of Iraq's giant onshore oil fields promised a relatively inexpensive way of boosting the world's oil supply, cheaper than shale or deep-water drilling.

There are few places left with accessible onshore oil fields capable of delivering quick gains. One location is Russia, where the output of huge oil fields discovered during the Soviet era is in rapid decline. New oil recovery technology used widely by Western multinationals can reverse the decline by extracting hitherto untapped reserves.

The question is whether the diplomatic freeze that followed the Russian annexation of Crimea will be allowed to thaw, enabling technology joint ventures and new investment.

Others are peering through the fractures in the collapsing Iraqi state and preparing to take advantage.

Iran is already giving military assistance to the beleaguered government in Baghdad, anxious to defend fellow Shia muslims and to protect Shia shrines. There is obvious risk of an Iranian occupation of areas of southern Iraq and the assault by the the Islamic State in Iraq and the Levant (ISIL) has handed a giant bargaining chip to Tehran in its negotiation with Washington over the ending of its sanctions against Iran.

Meanwhile, the Kurdish Regional Government, after years of dispute with Baghdad over the right to independently market oil produced in the Kurdish region, has begun to take unilateral steps to sell its own oil.

The KRG's own militia, the Peshmerga, last week took control of the town of Kirkuk and it has signalled its intention to link the giant Kirkuk oil field to the new Kurdish export route to Turkey.

There is a new great game being played out in the Levant and, as usual, oil is at centre-stage. It seems astonishing that only months ago, Western leaders identified Russia as the great threat to world peace and Stephen Harper berated the Russian leader, comparing him to Hitler and accusing him of mounting a slow-motion invasion of Ukraine.

While the alleged Russian invasion appears to have stopped, the ISIL invasion of Iraq is moving at breakneck speed, forcing Western governments to consider policy U-turns and new alliances. In this confusion, the Russian President, unlike his Western counterparts, will avoid rushing to judgment. He will watch and wait.

Massive Russia-China gas deal to shake up LNG markets
May 21, 2014 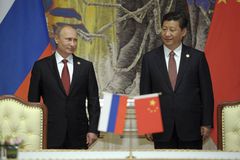 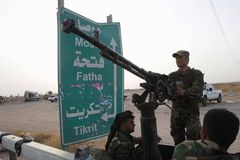