Investors love superstar CEOs. Sometimes, though, they should be praying for the exact opposite.

At Microsoft Corp., hopes are high that new boss Satya Nadella will re-energize the company and the company's share price reflects that optimism. The stock has jumped nearly 37 per cent over the past year.

At Yahoo Inc., there is also evidence of investor enthusiasm. Its share price has advanced nearly 18 per cent over the past 12 months, despite the online brand's continued deterioration. The market gains are largely a reaction to the windfall profits that the company has reaped from its stake in the newly public Alibaba Group Holding Ltd.

So which company is the better buy right now? Surprisingly, Yahoo may be the pick – if only CEO Marissa Mayer will sit on her hands and simply return money to shareholders.

Wishing for a do-nothing CEO may seem like an odd desire, but it's the best way to ensure that Yahoo shareholders derive the maximum value from the company's stake in two valuable properties: Alibaba and Yahoo Japan.

"Perhaps [Ms. Mayer] would consider returning all cash to stockholders, reducing the work force in the company to one person, and giving that person a dual-display terminal and let him/her watch the market value of Alibaba on one and Yahoo Japan on the other," writes Aswath Damodaran, a professor at New York University and authority on corporate valuation. "That is my best-case scenario."

He figures that Yahoo is worth $46.44 (U.S.) a share based on its net cash, a 35-per-cent stake in Yahoo Japan, a 17-per-cent slice of Alibaba and a $5.2-billion after-tax haul from Alibaba's initial public offering last month. His estimate is well above its current price of $40.31 a share.

But it comes with a caveat. He notes that the market seems to be attaching a negative value of about $12-billion to Yahoo U.S. He calls it a "Walking Dead discount," reflecting fears that Yahoo management "might do something senseless" with its new-found wealth in a bid to revive its core brand, which continues to suffer from declining market share. Since a liquidation of Yahoo isn't an option right now, because of the large tax bill that would result, he hopes Ms. Mayer will simply sit back and focus on returning cash to shareholders.

At Microsoft, the hopes are entirely different: Investors are betting big amounts that Mr. Nadella will breathe new life into the software giant. On Tuesday, the company treated guests to a first peek at its new Windows 10 operating system, which is scheduled to launch in the middle of next year.

If the new software takes hold, Microsoft might be able to jolt its bottom line back to life. Its net income of $22-billion in fiscal 2014 was below the equivalent figure in 2011.

But both Google and Apple are making inroads in the operating system market and Microsoft will have to be nimble to keep its place in a world where the real competition is to develop an operating system that can link a myriad of devices, from computers to mobile phones to TV sets.

Microsoft, with $86-billion in cash, has the staying power to be a contender. But after the big run-up in its share price over the past year, it's beginning to look expensive. It trades for 17 times earnings despite its slow income growth in recent years.

To invest in Microsoft, you have to believe in Mr. Nadella's ability to inject new energy into a company that has been fallen behind major tech trends, like search and social media, for more than a decade. To invest in Yahoo, you simply have to hope that Ms. Mayer does nothing.

Next version of Windows software could be crucial for Microsoft’s future
September 29, 2014 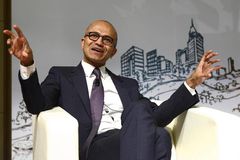 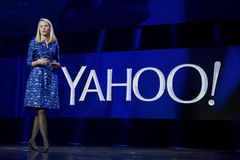 Why PayPal pioneer is singing the praises of monopoly
Subscriber content
October 1, 2014 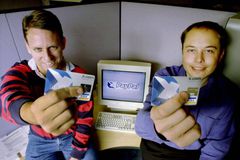