In many ways, the past few years have been defined by a single issue – inequality – and low-wage workers have been its public face. Thousands of fast-food workers gathered from Atlanta to Seattle last September to demand better wages. Protests flared up in Sao Paolo, Hong Kong, Rome, and Chengdu over inequality and wages. Wal-Mart employees recently held a Thanksgiving food drive for other Wal-Mart employees, illuminating the hardship faced by retail workers in America.

A new study by University of Massachusetts Professor Arindrajit Dube finds that a proposal championed by President Barack Obama to raise the U.S. minimum wage to $10.10 per hour would reduce the poverty rate by 1.7 per cent and pull 4.6 million Americans out of poverty. According to Mr. Dube, poverty rates shot up by 3.4 per cent during the Great Recession, and an adjustment to minimum wage would reverse at least half of that damage.

This study couldn't come at a more salient time. Right now 50 million Americans, or 16 per cent of the population, live under the poverty line according to the U.S. Census Bureau. In Canada, the poverty rate stands at 8.8 per cent, meaning 3 million Canadians struggle to meet their basic needs. The minimum wage debate revved up last year when U.S. Senators proposed an increase in the federal minimum wage, sending McDonalds' stock plummeting and drawing powerful trade groups to Washington to lobby against the legislation. Meanwhile, 13 states across the U.S. raised their minimum wages, as of Jan. 1.

Most academic debate over minimum wage has centred on the relationship between wages and job creation. Critics argue that higher minimum wages distort the labour market, diminishing job creation because businesses will pull back on hiring. University of California economist David Neumark has estimated that a $0.70 increase would cost 300,000 jobs and lift unemployment rates. By contrast, the Economic Policy Institute, a left-leaning think tank, estimates than a $10.10 minimum wage would benefit 30 million American workers, increasing consumer spending and boosting GDP by $32.6-billion.

Economists' views have shifted dramatically over the past 30 years. A 1978 survey in the American Economic Review showed that 90 per cent of economists agreed that minimum wage increases unemployment among low-skilled workers. In 2013, a University of Chicago survey showed that just 34 per cent of economists agreed that raising minimum wage would reduce employment for low-skilled workers, while 32 per cent disagreed.

In his study, Mr. Dube used data from 1990 through 2012 to calculate the correlation between poverty rates and minimum wage increases in various U.S. states. He found that minimum wage increases lead to "moderate" increases in incomes. Mr. Dube also noted that, in a survey of 12 key studies conducted over the last 20 years, the average correlation among their findings between higher minimum wages and the number of people living in poverty was -0.15, meaning that a 10 per cent increase in the minimum wage would result in 1.5 per cent fewer people living under the poverty line.

Even if Mr. Dube is correct and poverty rates decline in response to a raised minimum wage, however, this doesn't directly allow us to conclude that the number of jobs would remain constant. Wage pressures are a major factor in companies' investment decisions, and raising wages can drive jobs to other jurisdictions.

However, it's mostly developing countries who rely on cheap labour as a competitive edge, using it to lure foreign direct investment. For developed economies such as Canada or the U.S., low-wage labour is largely concentrated in the retail and food service industries; services comprise over 60 per cent of U.S. minimum wage employees, with the next largest category being "sales," presumably call center workers. Wages for manufacturing and production jobs float well above minimum wages, and service positions are much less susceptible to outsourcing. As Paul Krugman sagely put it, "Americans won't drive to China to pick up their burgers and fries."

So what is the optimum level of the minimum wage? In research by University of Quebec professor Pierre Fortin on Quebec's minimum wage during the 1970s and 1980s, Mr. Fortin concluded that a minimum wage greater than 50 per cent of average wages "is harmful to small wage earners." A minimum wage less than 45 per cent of the average, however, presents " very little risk" to employment levels.

The average hourly wage in Canada is $24.47, according to Stats Canada, implying that an $11 minimum wage is just the right equilibrium. (Kudos to Nunavut for hitting the target dead on.) In the U.S, average wages are $24.15, yielding an optimal minimum wage of $10.80. The current minimum wage of $7.25 is 30 per cent of average wages, indicating there's considerable slack for a hike.

If our goal is to increase income levels for the poorest communities, then minimum wages in the U.S. are too low. Across the board, economists are speaking up to argue that higher minimum wages can reduce poverty, and as long as the price needle doesn't tilt so far as to damage overall employment levels, the U.S. should catch up to speed. 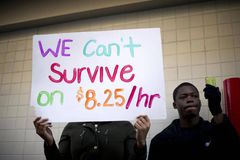 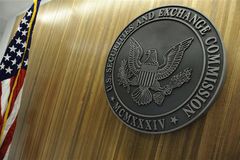