It has been an odd few weeks in Indian politics, starting back in January with the suit.

India's natty prime minister, Narendra Modi, erred in sporting vanity pinstripes for a meeting with U.S. president Barack Obama. He exposed himself to mockery and ridicule, which, however unjustified, distracted from the prime minister's important decision to seek a more harmonious relationship with the United States.

The whole business exposed a weakness in Mr. Modi's political armour. That matters because the global economy is looking to India for a lift. Much of that optimism was attached to Mr. Modi's popularity. International investors saw a rare politician with a mandate to get things done. Recent events suggest India's prime minister is mortal. That will prompt a reconsideration of India's trajectory.

The oddities continued. The Indian government abruptly changed the methodology it uses to to calculate gross domestic product, saying the economy expanded 6.9 per cent in the year ended March 2014, not 4.7 per cent as was previously reported. Economists were puzzled, the central bank governor among them. The statistics agency released the new number without a full explanation of its rationale. That will come at the end of February, it said. No matter. The government went ahead and declared that the economy was on track to expand 7.4 per cent in the current fiscal year. That suggests India is poised to surpass China as the world's fastest growing major economy. Except everyone remains unsure what to make of the new numbers.

The final bit of unreality came this week in New Delhi, where Mr. Modi's Bharatiya Janata Party won only three of 70 seats in the city state's elections. (The BJP holds all of Delhi's seats in parliament.) The only solace for the BJP was that its long-time rival, Congress, won no seats at all. Arvind Kejriwal's upstart Aam Aadmi Party, which Mr. Modi had tried to belittle as a band of anarchists, won the other 67.

Mr. Kejriwal wasn't an unknown. He used Congress support to become Delhi chief minister in late 2013. But then he quit after 49 days and the AAP was bulldozed by Mr. Modi in the national elections. Mr. Kejriwal's remarkable comeback rivals the drama of Mr. Modi's own landslide victory. The BJP and its leader had been basking in the aura of winning India's first majority government in a generation, using the momentum to win a series of state elections. Mr. Kejriwal this week broke Mr. Modi's stride. The BJP's master plan of accumulating state legislatures to more easily spread Mr. Modi's development agenda will become harder. The idea of a political opposition in India has been restored.

None of this suggests the India story under Mr. Modi already is over. The suit episode is trivial, and India remains one of the world economy's bright spots, no matter how you measure it. Like Washington, DC, New Delhi lacks statehood. Its loss won't seriously imperil Mr. Modi's agenda.

But symbolism is important in politics. The consensus view in the wake of recent events is that Mr. Modi's honeymoon is over. Perhaps, but that doesn't mean he can't recover his mojo. He is doing what it takes to boost economic growth. He is actively soliciting international investment, a shift from India's traditional indifference, and at times hostility, to foreign money. His government is selling stakes in state-owned companies to raise money to reduce the budget deficit.

Mr. Modi's "Make in India" campaign is thin on new initiatives, but it is working as a galvanizing force. States such as Maharashtra are getting in on the act, promising to reduce the time it takes to get government approvals for development projects to no more than 30 days. Investors are taking note. Companies such as Amazon and Japan's Softbank are spending hundreds of millions on e-commerce. Global executives are lining up at Mr. Modi's door. The Canada Pension Plan Investment Board plans to set up an office in Mumbai later this year, and Prem Watsa's Fairfax Financial Holdings recently launched Fairfax India, which has already raised $500-million (U.S.) and plans to double that amount.

Typically, capitalists would worry about the rise of an unabashedly populist and left-wing party like the AAP. But Mr. Kejriwal's campaign in New Delhi had an echo of Mr. Modi's in 2014. He kept gutter politics to a minimum. He vowed to end corruption. He focused on concrete ways to better people's lives. He talked about enabling wifi throughout the city and giving entrepreneurs access to government-sponsored startup incubators. He talked about increasing access to education and curbing abuses by corrupt government officials.

It was a message of hope, backed by concrete ideas. This also was Mr. Modi's message. The BJP lost sight of that in New Delhi, parachuting in a star candidate to run against Mr. Kejriwal and deploying a smear campaign that voters found distasteful. Expect Mr. Modi to refocus. He will release his first major budget as prime minister at the end of the month. That will be the moment to judge the man in the suit. 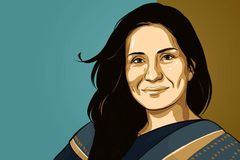