When we get around to writing the history of Canada's next generation of technology companies, the tale just might begin with a gathering this summer on the deck above a Muskoka boathouse owned by Magna International CEO Don Walker.

The session was called the "Dock Unconference" by its organizers at San Francisco-based C100, a networking group founded by Canadian-born executives who now live and work in Silicon Valley. The day saw 30 top Canadian tech executives and colleagues from California head to Ontario's cottage country to chat with the Magna boss and CEOs from a handful of leading companies, including George Weston, Royal Bank and Manulife.

Around lunch, a police boat pulled up at the end of Mr. Walker's dock, signalling the arrival of Prime Minister Justin Trudeau. He spent the afternoon in discussions on innovation, artificial intelligence and what's needed to foster the next generation of cutting-edge tech companies.

It's that final point – how to keep Canada's technology leaders and their companies in Canada – that continues to reverberate in government and finance circles. Domestic business leaders and politicians have watched too many Canadian tech startups blossom, then get snapped up by foreign buyers. There's a general recognition in Ottawa and on Bay Street that policy makers and financiers need to do more to nurture promising Canadian growth companies into global tech champions.

However, there's a hot debate over the role banks, insurers and pension funds will play in this nurturing process.

This summer, at least three financial initiatives are making the rounds, all aimed at providing patient capital for small to medium-sized businesses in an attempt to ensure they remain independent and Canadian as the companies expand.

As detailed Monday in The Globe and Mail, one concept is to create a bank-backed private sector fund, modelled on Britain's five-year-old, £2.5-billion ($4.3-billion) Business Growth Fund. The idea is to create a $1-billion-plus Canadian fund that invests in small business and backs up that capital with skilled advisers, business development and networking events.

The approach has its advocates, with the Bank of Canada, CIBC and private equity CEOs pushing for a local version of the British fund. Critics in the banking sector argue that the fund would be a poor use of their capital, and that money alone doesn't solve the problem of helping small businesses expand into global markets.

Another option is extending flow-through share financings to virtually any small business. Junior mining and resource companies have successfully used these equity offerings for decades to fund exploration; investors embrace these offerings because the money they commit is deductible from income. Politically, expanding the flow-through share concept would be difficult to swallow, as creating new tax deductions for Canadians in top tax brackets runs against the Liberal Party's election platform.

Finally, there's talk of increasing the capital available to Canadian startups by mandating that a certain percentage of pension fund assets be earmarked for investment in small to medium-sized businesses. In theory, similar thresholds could be imposed on all institutional investors: Insurers and mutual funds could be asked to carve out a certain portion of their portfolio for venture capital. The pension fund crowd would fight such a move, arguing that any arbitrary restriction on where they invest will hurt performance, and the priority should be seeking out the best possible risk-adjusted returns for retirees.

There's a school of thought that suggests the challenges facing small Canadian companies with big growth plans is one of corporate culture, not finance. Many startup companies run into problems building revenues and graduating from small contracts with a few clients to large relationships with several major corporations. Think about it: Big companies, Canadian and foreign, are trying to increase efficiency by doing more business with fewer suppliers. That's not an approach that helps unproven companies.

On a Muskoka dock this summer, there was no clear consensus on the best way forward. Mr. Trudeau didn't make any commitments. Bankers and tech executives say delivering on the Liberal promise of an innovation economy is one of the two or three major files on Finance Minister Bill Morneau's desk. If there's a new approach in the works to funding small business – a massive venture capital fund, flow-through shares or government mandates on pension investing – the Finance Minister will set the agenda.

But the C100 meeting in cottage country between Canada's top tech talent, Silicon Valley expats and the heads of major financial institutions, an auto parts maker and a grocer shows there is a recognition of the challenges that come with building great global companies, and a willingness to work together on answers. 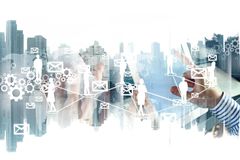