In all the talk of a U.S. recovery, one important group has been conspicuously missing in action – consumers. As a troubled U.S. retail picture shows, shoppers have not returned in force to their local malls, even though they are starting to pile up more debt.

Household debt climbed slightly more than 2 per cent to $11.5-trillion (U.S.) in the final quarter of 2013. That's the first year-over-year increase since the Great Meltdown, but remains well off the $12.7-trillion chalked up at the high-water mark in 2008.

And it doesn't seem to be changing the recent cautious shopping habits of American consumers. By the time the all-important Christmas shopping season limped to a close in late December, retail sales in the U.S. had expanded at their slowest clip in four years. Consumer spending in January was flat and confidence has been waning. If the shopaholics who drove previous robust recoveries don't resume their free-spending ways, the U.S. could be looking at a prolonged period of sputtering growth or even stagnation.

It can't all be attributed to miserable weather. More important factors include feeble income growth, rising interest rates and anxiety over job security. U.S. house prices, another important component of public confidence, posted their largest increase last year since the height of the housing bubble. But this won't be sustainable in the face of higher mortgage costs.

The latest numbers and forecasts for a handful of major retailers underscore the disquieting trends. Take Abercrombie & Fitch Co., which wrapped up a disappointing year with a fourth-quarter drop in profit of 58 per cent and a decline in net sales of 12 per cent. No wonder the apparel maker's chief executive, Mike Jeffries, described 2013 as "a challenging year."

Now, any retailer can have a bad year if it gets its merchandise mix or marketing wrong, especially one that depends heavily on fickle young consumers. Some chains have weathered the storms better than others. Macy's and J.C. Penney - which has reported its first quarterly profit since 2011 - both used aggressive cost cutting and price discounting to move more merchandise. But other purveyors in various market segments continue to wrestle with the problem of reluctant spenders.

Mighty Wal-Mart Stores Inc. reported last week that its annual profit would come in below analysts' expectations and that net sales would be closer to the lower end of its earlier 3- to 5-per-cent forecast. The revised outlook came after comparable same-store sales in the U.S. slid for the fourth quarter in a row.

A leading culprit was a "low-single-digit decline" in groceries, which account for about half of the chain's sales. Some of that decline can be attributed to a reduction  of certain government benefits - such as food stamps - that were extended in the aftermath of the financial crisis. Other retailers may have felt those effects, too.

Then we have rival Target Corp., which is reeling from a massive assault by computer hackers and seems utterly perplexed by the complexities of the Canadian market. Same-store sales slid 2.5 per cent and profit fell 46 per cent in the latest fiscal quarter from a year earlier. The results included $17-million in net expenses stemming from the theft of data from an astounding 40 million customer records, and more hefty costs loom in future quarters to resolve the security problem, win back customers and get its stumbling Canadian operations on the right track.

Nordstrom Inc. also had a rough fourth quarter, with lower profit and a decline in same-store sales for its full-service department stores. The venerable chain, which has a more upscale client base than Target, is also poised to invade the Canadian market. But if it's counting on a healthier economy north of the border, less consumer angst and heavy spending from debt-laden consumers, it may be in for a rude surprise.

With flagship deal, HBC opens the door to a REIT
Subscriber content
January 27, 2014 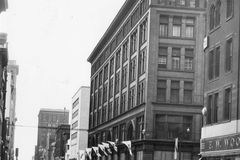