The relationship between conservatives and carbon taxes is like oil and water. Or, the Leafs and the Stanley Cup.

In Canada, carbon taxes have been mocked as a job-killing tax grab. Former prime minister Brian Mulroney, who still commands respect in the Conservative party, warned recently that pushing ahead with a unilateral Canadian carbon tax might render this country uncompetitive versus the United States.

That's downright tame compared with U.S. Republicans, who see carbon taxes as a liberal plot and climate change a debating point. Donald Trump, the party's standard-bearer in the race for the White House, has called global warming a "hoax" invented by China. And he's all in on the dubious notion of "clean coal."

No Republican who's serious about getting elected, or staying in office, dares talk openly about a carbon tax.

So it's notable that Michael Chong, one of 12 candidates vying for the leadership of the Conservative Party of Canada, is making a carbon tax the centrepiece of his platform. The Toronto-area MP unveiled a sweeping tax reform plan last week that hinges on a hefty carbon tax – $130 a tonne by 2030.

Even the Trudeau Liberals aren't going that far. They've proposed an initial $50-a-tonne tax by 2022.

The surprising thing about Mr. Chong's proposal is that it fits nicely within conservative orthodoxy. It isn't a crazy idea that will hobble the economy or kill jobs.

Mr. Chong is proposing to use the revenue generated by taxing carbon dioxide emissions to cut federal income and business taxes by 10 per cent.

"The real question is, 'What do we do with the revenues that come into the system?' and as a Conservative, I believe that we should be using these revenues to reduce income taxes," Mr. Chong argued this spring, when he declared his candidacy.

Shifting tens of billions of dollars in taxes from income to consumption is actually at the heart of conservative philosophy, he insisted.

"The idea, all along, by the architects of [a carbon tax] is that it should be a tax shift, from income to consumption," Mr. Cameron said. "That encourages behavioural change, but it doesn't grow government."

And yet he acknowledged that the history of the carbon tax among conservatives has been "difficult."

The backlash lasted years. "It was seen as a Liberal plan," Mr. Cameron said.

"It's hard to support something you associate with the other party."

The hostility may finally be easing, particularly at the provincial level.

The idea is still far from mainstream among Conservatives. Mr. Chong is the only federal leadership hopeful so far endorsing a carbon tax. Several, including Saskatchewan MP Andrew Scheer and Ontario MP Kellie Leitch, are openly hostile to the idea.

Getting the United States to move in the same direction could also prove difficult, particularly if Mr. Trump wins the White House in Tuesday's U.S. Presidential election. The Republicans' party platform questions the objectivity of climate scientists and attacks Democrats for manufacturing an "environmental crisis."

A Trump victory, coupled with a strong showing by Republicans in the U.S. Congress, would set back progress toward climate pricing, perhaps for years.

That shouldn't stop Canada from moving ahead on carbon pricing. Mr. Cameron argues that a well-designed carbon tax plan can protect "trade-exposed" industries, such as petrochemicals or fertilizer makers.

And if conservatives can embrace a carbon tax, maybe the Leafs have a legitimate shot at the Stanley Cup. 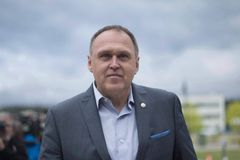