Sylvain Charlebois is a professor at the Food Institute, University of Guelph.

Medicinal marijuana is going mainstream – or, at least, it may become available at many retail outlets. Two major drug chains, Shoppers Drug Mart and Rexall, have reportedly explored retail distribution of medical marijuana in recent months. For Shoppers, the reported aim is to sell several brands, perhaps even under its own private labels.

Imagine, Canadians could soon be purchasing President's Choice pot. This may sound like a far-fetched idea, but considering how quickly our marijuana landscape is moving, such a scenario is conceivable.

Both retailers unmistakably see the potential in making such a pre-emptive move on selling medical marijuana. Similar to energy drinks a few years ago, marijuana could significantly bolster top-line results for the next decade or so. The medicinal market would undoubtedly be a smart gateway into the potentially lucrative recreational market. With a pot-friendly government in Ottawa, the prospects of seeing recreational marijuana legalized in Canada is real.

Colorado, which legalized the sale of recreational marijuana a few years ago, saw its retail sales of the product reach almost $1-billion (U.S.) in 2015. Most importantly, retail sales generated more than $135-million in new tax revenue for the state and many analysts expect that number to quadruple soon. Colorado is essentially getting a piece of what used to be an underground economy. The state of Washington is seeing similar results. These numbers are too extraordinary to be overlooked.

From a business perspective, marijuana sales also have obvious drawbacks. For one, brand equity could be affected by selling what many consumers still perceive as a forbidden product. Loblaws, which owns Shoppers Drug Mart and carries the valuable President's Choice brand, has likely concluded that benefits outweigh such downsides, but while society may have become more liberal in its views, the stakes are very high for these companies. Perhaps, once Health Canada's blessings are given, our collective perception will forever change, as appears it to be happening in the United States.

Given that the product is marijuana, traceability will be key in moving forward. Assurances that the product can be traced from seed to sale is critical for product quality and the integrity of the system. As marijuana takes a larger place in the legitimate economy, more technologies will be developed to increase production efficiencies and quality testing. Access to steady supply, helping retailers set reasonable price points, is also key.

Canada's regulatory scheme is a long way from ready to support retail marijuana sales. Public education and awareness would be key, but the issue of taxation also requires deliberation. If Ottawa is going to tax medicinal marijuana, as some U.S. states are currently doing, it should be clear on its underlying intent.

The government needs to think clearly about how it will proceed with recreational marijuana now and in future. Revenue could be directed to fund research that would gauge the impacts of cultivation and use, local law-enforcement capacity, neighbourhood improvement programs, state parks and treatment programs. When giving society access to vices, the moral state can never be too far away. Government should mitigate against probable undesirable societal afflictions, as the provinces have done with gambling.

The most critical aspect to allowing marijuana to run more freely across supply chains is international commerce. The United States has expressed its concerns about Canada's intention of making marijuana more readily available to consumers. Even if some states have moved ahead with the legal distribution of marijuana, many states remain opposed. Canada must maintain a good relationship with the United States – given the macroeconomic climate, the last thing we need is a trade dispute spawned by the availability of medicinal marijuana.

Our collective wisdom would likely suggest that we might not be there yet as a society. But both Shoppers and Rexall are pursuing what both companies have done so well for decades: selling drugs to Canadians responsibly. These companies adhere to a professional code of conduct. Considering the qualified knowledge and that the infrastructure is already available, going with privately-owned drug chains only makes sense.

In Ontario, some have suggested that a Crown corporation should be the preferred choice. The idea of granting the Liquor Control Board of Ontario a licence to distribute marijuana is inappropriate. The provincially-owned Crown corporation does not have the professional expertise to sell drugs, nor does it have the capacity or know-how to properly trace and track such products for quality assurance.

Still, one has to admit that the idea of buying marijuana while earning Air Miles reward points would have been interesting. 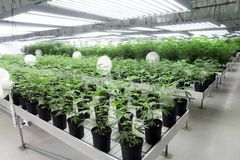